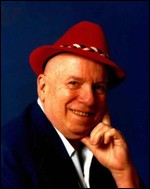 Born in Syracuse, New York, Van Heusen began writing music while at high school. He renamed himself at age 16, after the shirt makers Phillips-Van Heusen, to use as his on-air name during local shows. His close friends called him "Chet".[3]

Studying at Cazenovia Seminary and Syracuse University, he became friends with Jerry Arlen, the younger brother of Harold Arlen. With the elder Arlen's help, Van Heusen wrote songs for the Cotton Club revue, including "Harlem Hospitality".

He then became a staff pianist for some of the Tin Pan Alley publishers, and wrote "It's the Dreamer in Me" (1938) with lyrics by Jimmy Dorsey.

Collaborating with lyricist Eddie DeLange, on songs such as "Heaven Can Wait", "So Help Me", and "Darn That Dream", his work became more prolific, writing over 60 songs in 1940 alone. It was in 1940 that he teamed up with the lyricist Johnny Burke.

Burke and Van Heusen moved to Hollywood and wrote for stage musicals and films throughout the 1940s and early 1950s, winning an Academy Award for Best Original Song for "Swinging on a Star" (1944). Their songs were also featured in many Bing Crosby films including some of the Road films and A Connecticut Yankee in King Arthur's Court (1949).

He was also a pilot of some accomplishment; He met Joe Hornsby, who worked for the FAA in Los Angeles and son of the famous Dan Hornsby, the father of Nikki Hornsby, at that time because of his music with interest in flying. Joe Hornsby sponsored Jimmy into an exclusive pilots club called the Quiet Birdmen which held meetings at Proud Bird restaurant at LAX and these men were lifelong friends until the 1970s. Also Jimmy worked, using his birth name, as a part-time test pilot for Lockheed Corporation in World War II.

Van Heusen then teamed up with lyricist Sammy Cahn. Their three Academy Awards for Best Song were won for "All the Way" (1957) from The Joker Is Wild, "High Hopes" (1959) from A Hole in the Head, and "Call Me Irresponsible" (1963) from Papa's Delicate Condition. Their songs were also featured in Ocean's Eleven (1960), which included Dean Martin's version of "Ain't That a Kick in the Head," and in Robin and the 7 Hoods (1964), in which Frank Sinatra sang the Oscar-nominated "My Kind of Town."

Cahn and Van Heusen also wrote "Love and Marriage" (1955), "To Love and Be Loved", "Come Fly with Me", "Only the Lonely", and "Come Dance with Me" with many of their compositions being the title songs for Frank Sinatra's albums of the late 1950s.

Van Heusen wrote the music for five Broadway musicals: Swingin' the Dream (1939); Nellie Bly (1946), Carnival in Flanders (1953), Skyscraper (1965), and Walking Happy (1966). While Van Heusen did not achieve nearly the success on Broadway that he did in Hollywood, at least two songs from Van Heusen musicals can legitimately be considered standards:[3] "Darn That Dream" from Swingin' the Dream; "Here's That Rainy Day" from Carnival in Flanders.

He became an inductee of the Songwriters Hall of Fame in 1971.[4]

Van Heusen composed over 800 songs of which 50 songs became standards. Van Heusen songs are featured in over two hundred and twenty films.

Although not considered handsome by conventional standards, Van Heusen was known to be quite a ladies man. James Kaplan in his book Frank: The Voice (2010) wrote, "He played piano beautifully, wrote gorgeously poignant songs about romance...he had a fat wallet, he flew his own plane; he never went home alone." Van Heusen was once described by Angie Dickinson, "You would not pick him over Clark Gable any day, but his magnetism was irresistible."[5] In his 20s he began to shave his head when he started losing his hair, a practice ahead of its time. He once said "I would rather write songs than do anything else -- even fly." Kaplan also reported that he was a "hypochondriac of the first order" who kept a Merck manual at his bedside, injected himself with vitamins and painkillers, and had surgical procedures for ailments real and imagined.[5]

I took song writing seriously when I discovered girls.[6]

It was Van Heusen who rushed Sinatra to the hospital after Sinatra, in despair over the breakup of his marriage to Ava Gardner, slashed one of his wrists in a failed suicide attempt in November 1953.[7] However, this event was never mentioned by Van Heusen in any radio or print interviews given by him.

Van Heusen married for the first time in 1969, at age 56, to Bobbe Brock, originally one of the Brox Sisters and widow of the late producer Bill Perlberg. Van Heusen retired in the late 1970s and he died in Rancho Mirage, California, in 1990 from complications following a stroke, at the age of 77.[8] His wife, Bobbe, survived him. Van Heusen is buried near the Sinatra family in Desert Memorial Park, in Cathedral City, California.[1][9] His grave marker reads Swinging on a Star.[10]

He won one Emmy Award for Best Musical Contribution, for the song "Love and Marriage" (1955) (lyrics by Sammy Cahn), written for the 1955 Producers' Showcase production of Our Town.[11]

He was nominated for a Grammy Award in 1965 for Best Musical Score Written for a Motion Picture or TV show for Robin and the Seven Hoods.

He was also nominated for three Tony awards:

He was nominated three times for a Golden Globe Award.

He won a Christopher Award in 1955 for the song "Love and Marriage".

This article uses material from the article Jimmy Van Heusen from the free encyclopedia Wikipedia and it is licensed under the GNU Free Documentation License.

After You've Gone Bernese Blue Note Quintett
Update Required To play the media you will need to either update your browser to a recent version or update your Flash plugin.