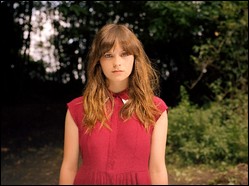 Gabrielle Ann Aplin (born 10 October 1992) is an English singer-songwriter.[2] Aplin came to public attention after she gained a large online following by posting acoustic covers of songs on her YouTube channel.

In February 2012, Aplin signed a recording deal with Parlophone and began recording her début album. She gained mainstream attention the following November, when she was selected to record the soundtrack for a John Lewis television commercial with a cover of Frankie Goes to Hollywood's "The Power of Love", which charted at number 1 on the UK Singles Chart in December 2012.[3] Her début album English Rain, was released in May 2013 to positive reviews. It debuted and peaked at number two on the UK album chart and led to several more singles: "Please Don't Say You Love Me", "Panic Cord", "Home" and "Salvation". English Rain has since been certified Gold in the UK, selling over 100,000 copies.

Aplin grew up in the small village of Sutton Benger,[2] near Chippenham. She is the elder of two children. When she was 11 years old, her parents bought her first guitar.[5] Aplin has stated that her music was influenced by listening to the Joni Mitchell and Bruce Springsteen collections of her parents during her childhood.[6] She is also a fan of the singer-songwriters Bob Dylan and Leonard Cohen, as well as the rock band The National.[5]

Aplin went on to study music at the City of Bath College,[2] participating in the college's in-house label BA1 Records.[7]

Aplin's first release was the 5-track Acoustic EP, which she self-released on her own label Never Fade Records on 13 September 2010. It reached the top 25 in the UK iTunes album chart.

Aplin's second EP, Never Fade, was released on 9 May 2011. In this EP, she expanded her sound, showcasing a more folk rock sound and playing all the instruments herself.[8] In April 2011, Aplin was invited to perform for BBC Introducing at Maida Vale Studios, where she played 3 tracks from Never Fade and a cover of the Coldplay song, "Fix You",[2] which is currently the most viewed video on the BBC Introducing YouTube channel.[9]

Aplin released her third EP, Home, on 12 February 2012, again on Never Fade Records.[10] She described this release as "the most honest thing I've ever written and recorded."[11] The lead track "Home" was featured on the iTunes Store as "single of the week" and was also Aplin's first track to be played on BBC Radio 1.

Later that year, Aplin was confirmed as the soundtrack to the John Lewis 2012 Christmas television advertisement, covering Frankie Goes to Hollywood's "The Power of Love".[15] In an interview, she said, "I was worried people might hate me because they were so attached to the original single. But I've since been in touch with Holly Johnson, and he said some lovely things about my take on his song."[6]

On 12 December 2012, Aplin announced that the title of her début album would be English Rain. The album's release date was later confirmed as 13 May 2013.[16] On its release, English Rain charted at number two on both the UK album charts, selling over 35,000 copies. It reached number 11 in Ireland, number 10 in Australia, and number 39 in New Zealand.[17] English Rain went on to gain international success and gave Aplin two Australian number ones.

In 2013, Aplin announced that her record label, Never Fade Records which was originally launched in 2010 so that Aplin could release her own music, would now represent other musicians. Her first signings were Welsh folk-jazz singer Hannah Grace, who had previously supported Aplin on tour, and indie folk artist Saint Raymond.[18] Never Fade Records' first release since Aplin's own Home EP in February 2012, was Saint Raymond's Escapade EP, released on 22 April 2013. Saint Raymond has since been released from Never Fade Records to allow him to sign a deal with Asylum, part of the Atlantic Records group.[19]

In 2014, Aplin released her English Rain EP in the United States. This EP was released on 6 May and features five songs from her début album, as well as a cover of Canadian singer Joni Mitchell's A Case of You.[20]

In May 2015, Aplin announced her second studio album, Light Up the Dark. The album announcement also featured the release of the title track's music video.[21] The video for the second single from Light Up the Dark, "Sweet Nothing", was released on 6 August 2015.

Aplin has appeared in fashion spreads for magazines such as Vogue and GQ. In September 2015, it was revealed that she had signed a modelling deal with Select modelling agency, although she stated in an interview, "It’s not like I want to go and be a model or anything. They’ll only ever book me to do something that reflects me and fits my music."[22]

In 2016 Aplin began to gain popularity in Brazil when her song Home (Gabrielle Aplin song) was used in the popular soap opera Totalmente Demais.[23] Aplin visited Brazil in May 2016 to make a cameo appearance in the final episode of the soap. Following her appearance and a live performance on Domingão do Faustão 'Home' reached number 1 on the Brazilian iTunes chart, marking Aplin's fourth number 1 single worldwide.[24]

On 26 June 2016, Aplin played on Glastonbury Festival at the Acoustic stage and then at BBC Introducing stage.[25]

On 9 November 2016, Aplin released Miss You. The song has been described as a departure from her previously guitar-driven sound on Light Up the Dark,[26] and the production as being much less 'bare bones' than her previous efforts.[27] The song is the first single from Aplin's Miss You EP.

Aplin released Night Bus as the first single to be released from Avalon EP on 16 December 2016.

In February 2017, Aplin parted ways with Parlophone Records to focus on releasing material via her own independent record label, Never Fade Records. Her new material is based on recent events in world politics.[28]

Aplin announced her single Waking Up Slow on 8 August 2017. It was released the following day along with the pre-order for her newest EP Avalon which features four songs including Waking Up Slow. The EP was released on 6 October.[29] Aplin's song Miss You was added to Taylor Swift's 'Songs Taylor Loves' playlist on Spotify in September 2017.

This article uses material from the article Gabrielle Aplin from the free encyclopedia Wikipedia and it is licensed under the GNU Free Documentation License.

A Dream Is A Wish Your Heart Makes Kat Edmonson
Update Required To play the media you will need to either update your browser to a recent version or update your Flash plugin.