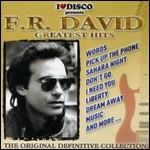 F. R. David began his career as Robert Fitoussi, a Tunisian-born singer-songwriter and guitarist with French garage band Les Trèfles. After one E.P., they mutated into Les Boots, but achieved very little commercial success. Adopting his new stage name, he went solo in 1967 and recorded some orchestral pop psych with Michel Colombier, including a version of The Beatles' "Strawberry Fields Forever" (Il Est Plus Facile). He enjoyed minor hits with the Éric Charden penned "Symphonie" and a cover of The Bee Gees' "Sir Geoffrey Saved the World", but this success did not last. He then created Aztec Records with Sonopress & Carrer and started producing with Michael Haubrich and they wrote and produced several groups. The first was called Cockpit ("Lena Lena, "FIFI", "Father machine", "Eight Days and a Wake up", "Ole Mister Hardy", "Bright Tomorrow", "Hide & Seek", "Didn't work out"), followed by David Cast ("Mariana", "Fancy Colors"), Doc & Prohibition Group ("Superman, Superman", "Nothing is Changed", "Generation", "Gimme Gimme"), Ragga ("Ho Daddy Ho Mamma", "Patins à Roulettes"), Alain Maria ("Pauvre USA", "N'oublie surtout pas d'être belle"), Freddy Meyer ("Paint My seasons"), DD Daughterdydawn ("Timeless Time"), with Vangelis Papathanassiou "Let it Happen", "He-O", "Bird of Love", "The Pawn" During the early 1970s, he formed the progressive rock group David Explosion but their one album was not a success. He worked with Vangelis for a while, appearing as vocalist on some of his early 1970s albums, and then joined French rock band Les Variations, appearing on their final album Café De Paris (1975), which featured an early rock-disco crossover "Superman, Superman". When the band broke up, he went solo again. His personal "trademarks" are his sunglasses and his guitar (a white Fender Stratocaster).

His most recognised song was his hit "Words" in 1982, which sold eight million records worldwide, topped various charts around Europe in late 1982, and reached No. 2 in the UK Singles Chart[1] in spring 1983, covering a rival version by 1960s hitmakers The Tremeloes, and going on to becoming the 22nd best-selling single in the UK during 1983. The song is a catchy, slightly plaintive synth-led mid-tempo ballad sung in a slender, high-pitched voice. F. R. David's voice is also heard on the 1974 45rpm single "Who" by Vangelis under the name 'Odyssey'.

During the 1990s he took time out from his own music career and focused on writing and composing for other well known artists. F. R. David released another album Words - '99 Version in 2000 which contained mostly covers. In 2009 he released the album Numbers, which was in collaboration with other musicians and featured songs that F. R. David himself most preferred.[2]

This article uses material from the article F. R. David from the free encyclopedia Wikipedia and it is licensed under the GNU Free Documentation License.

Please Don't Talk About Me When I'm Gone Sonny Stitt
Update Required To play the media you will need to either update your browser to a recent version or update your Flash plugin.