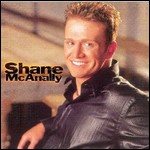 In 2013, McAnally and Brandy Clark wrote the music and lyrics for the new original, Broadway musical, Hee-Haw. The book was written by Robert Horn and it is currently in pre-production.

McAnally and music producer Rich Herring recorded a demo of a song that McAnally had written. The song, "Just One Touch", earned McAnally a publishing deal as well as a recording contract with Curb Records.[3]

In 1999, McAnally signed with Curb Records and began recording his first album for the label as well as his first single. "Say Anything" was released in 1999 as the lead-off single to his self-titled debut album. The song failed to reach the Top 40 of the US Billboard Hot Country Singles & Tracks (now Hot Country Songs) chart. The follow-up single, "Are Your Eyes Still Blue", became his first Top 40 single, peaking at number 31. McAnally released two more singles from the album; "Run Away", which peaked at number 50 on the country chart, and "It Comes and Goes", which failed to chart at all. His album was finally released in October 2000.

McAnally is openly gay.[7] McAnally married his partner of six years, Michael Baum, in September 2012.[7] The couple welcomed a daughter and a son in December 2012.[7]

This article uses material from the article Shane McAnally from the free encyclopedia Wikipedia and it is licensed under the GNU Free Documentation License.

Recado Bossa Nova Charly Antolini And The Ladies Of Jazz
Update Required To play the media you will need to either update your browser to a recent version or update your Flash plugin.