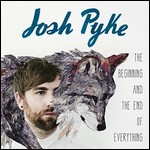 Josh Pyke is an Australian singer-songwriter and musician.

Josh Pyke was in his first band by age 12 and played his first performance in front of 650 parents and students at his primary school graduation. Playing guitar and initial song writing efforts came aged 14. Despite his aptitude for song writing and performance, he stayed 'under the radar' throughout his high school years at Fort Street High School.[1]

While part of Sydney band An Empty Flight he successfully applied for a grant from the Music Board of the Australia Council under the Buzz Project[2] to remix a number of his own demo recordings to be released as an EP Current Works Volume 1, under the name of Night Hour. The lead track, 'Kids Don't Sell Their Hopes So Fast' received wide-ranging radio airplay on national youth broadcaster triple j and on various community radio stations including 3RRR in Melbourne and Fbi in Sydney. In 2004 Pyke won the Jaxter Music Award for his single 'Kids Don't Sell Their Hopes So Fast'.[3] The proceeds went towards a home studio, which enabled him to concentrate on his solo output and songs that were to become his debut mini-album Feeding The Wolves.

Pyke signed to Australian indie label Ivy League Records in 2005 and his first release on the label was a mini-album entitled Feeding the Wolves. It features the single "Middle of the Hill", as well as second single "Private Education". Josh toured early in 2005 with Jebediah frontman, Bob Evans, aka Kevin Mitchell.

In 2006 Pyke spent a month in New York, writing and performing showcases, and also ventured to the UK for the first time in support of Feeding the Wolves, once supporting New York band the Walkmen, and once on a small club tour of the UK.

Pyke is an APRA Ambassador and has been a member since 2002.

Josh Pyke released his debut album, Memories & Dust, on March 10, 2007 and it debuted at #4 on the Australian ARIA Album Chart. He also guest programmed rage on that date. The lead single from the new album, entitled "Lines on Palms", hit Australian airwaves in mid-January. When fans pre-ordered Memories & Dust through the fanclub website, they received a bonus CD of the live private show Josh did at The Wesley Anne in Northcote, Victoria in 2006.

The pattern for Josh to release 'Memories & Dust' worldwide was laid out when Ivy League Records linked a deal with Island/Universal (UK) in mid-2006 via the label's managing director Dan Keeling, who made his mark signing global superstars Coldplay.

Pyke toured the UK in support of Ben Kweller and Scott Matthews, as well as conducting his own sold out headlining tours across the UK, culminating in being invited to play the legendary Glastonbury Festival in 2007. That year he also played at the SXSW music conference in Austin, Texas, where he performed on the Island records showcase with Amy Winehouse and the Kaiser Chiefs.

Pyke performed at the 'Escape to the Park' concert in King's Park, Perth, Western Australia alongside The Panda Band, Tex Perkins, Sarah Blasko and Augie March. He also performed at the 2006-2007 Falls Festival in Lorne, Victoria and Marion Bay, Tasmania on New Year's Eve.

He also sang a cover version of "Wuthering Heights" by Kate Bush for No Man's Woman, which was released in 2007.

In April 2007 his debut album, Memories & Dust, was nominated for a J Award by triple j.

Pyke picked up an ARIA for Best Adult Contemporary Album at the 2007 ARIA awards for Memories & Dust.

Pyke's second album Chimney's Afire was released October 4, 2008 and was recorded at Sydney's Linear Recording studios. It made its debut at #3 on the official ARIA Album Chart,[4] and #1 on the ARIA Australian Album Chart.[5] He conducted a small tour to showcase songs off this album. The first single off the record was "The Lighthouse Song", and the second "Make You Happy".

In 2008, Pyke and Michael Yezerski won the APRA award for Best Original Song Composed for the Screen for 'When We Get There', from the film The Black Balloon.

In 2009 Pyke again went abroad, this time to the US to play in LA supporting Youth Group, a small club show run in NYC, followed by two showcase performances at SXSW. Pyke then flew from the USA to carry out a short sold out headline tour of the UK. The same year he also played at Sound Relief, Splendour in the Grass and Sounds of Spring.

In August 2009, he played a series of concerts where The Beatles White Album was played from start to finish with Tim Rogers, Chris Cheney and Phil Jamieson. The tour was extended due to popular demand.

That year Pyke reclaimed the ARIA for Best Adult Contemporary Album and was also nominated for Best Male Artist.

In 2010 Pyke headed back to the UK for a string of dates with Emma Pollock.

In January 2011 Pyke spent a month alone in New York to finish writing the Album that was to become "Only Sparrows". On return he recorded the album with ARIA Award-winning producer Wayne Connolly and released August 19, 2011. The album debuted at #4 on the ARIA Charts.

In October 2011, Pyke once again toured the UK, this time on a co-headline tour with friend and occasional collaborator Mike Rosenberg AKA Passenger.

In late November 2011, Pyke released a new song from the album, entitled 'Punch in the Heart', singing harmonies with Australian musician Katy Steele, who resided in New York at the time of the song's release. The song's music video portrays both singers in a split-screen view performing twin one-take vocal recordings to the camera.

For the 2011 ARIA Awards, Pyke was nominated for three awards with Connolly: Best Male Artist, Engineer Of The Year and Producer of The Year.

The Beginning And The End Of Everything (2012present)

On July 6, 2013 Pyke released his fourth album, The Beginning And The End Of Everything.,[6] which debuted at #7 on the ARIA Albums Chart. The release was followed by a sold out national tour.

In the year before the release he played at the 2011/2012 Falls Festivals in VIC and TAS before heading to Southbound Festival in WA. In February he performed Love Lies and a cover of The Jezabels' Endless Summer featuring Elana Stone (The Rescue Ships) on triple j's Like a Version. The song made it to the Like A Version Volume 8 CD.

Soon after he embarked on his Love Lies national tour and also played at Byron Bay Bluesfest.

That year, Pyke also joined a cast of Australian musicians and industry folk to launch a campaign to support peers who have hit hard times. The campaign was called Support Act and Pyke became an ambassador, featuring in the TV commercial - Not everyone in the music industry is able to lead a comfortable life when the music stops playing.

Pyke became a PPCA Patron Program Ambassador after its launch in 2012. It was established to better educate artists, record labels and businesses around the country on the work PPCA does in safeguarding the rights of Australian artists.

Since the release of The Beginning And The End Of Everything and his national tour, Pyke has played at several festivals including, Conception Day at Macquarie Uni, Toowoomba Carnival of Flowers and City of Wanneroo. He also guest programmed rage in November.

Pyke recently announced another solo tour for early 2014. Tickets for the Lone Wolf Tour are currently on sale at www.joshpyke.com.

Pyke is an ILF ambassador and has contributed thousands of dollars towards the fund. In September 2009, he held the event Busking for Change as part of Indigenous Literacy day, with all proceeds going towards the ILF. Pyke performed a solo set to a small audience, along with guest speakers from the ILF discussing the need for change in literacy levels in Indigenous communities. Pyke stated: Indigenous issues are something I've been interested in for many years, and the concept of words and language and communicating ideas in that way is especially relevant to my own career. Guest performers included Tim Rogers (You Am I), Phil Jamieson (Grinspoon) Tim & Dave (Dappled Cities) and DJ's 'More Pop Less Rave'.

Following the success of the 2009 event, another was held in August 2010, in which Holly Throsby, Boy and Bear, Passenger and a DJ set raised more greatly needed funds for the ILF. In 2011, Pyke donated proceeds from his Fans First tour to the ILF. The third sold-out Busking For Change event occurred in 2012, with guests Passenger and Evan & The Brave. As of the third event, over A$43,000 has been raised.

Pyke and Andy Griffiths attended the ILF's Garma Festival in 2011, run by the Yothu Yindi Foundation. While there, Pyke performed and ran music workshops at the youth forum.

In conjunction with APRA in early 2013, Busking for Change presented the Josh Pyke Partnership. The partnership offered an unsigned musician the opportunity to receive mentorship and funding to help grow their career. The prize included an initial meeting with Pyke, Gregg Donovan (Wonderlick Entertainment) and Stephen Wade (Select Music) to establish a business plan, a follow-up meeting three months later and $7500 in funding.

Pyke is a member of Australian indie group Basement Birds, which includes Kav Temperley, Kevin Mitchell aka Bob Evans and Steve Parkin. They released their self-titled debut 16 July 2010 and toured the album in Australia in August the same year. The weeks and months following the release also saw the Basement Birds on a media rollercoaster, which included a Sunrise appearance, triple j Like A Version, APRA performance and a Channel [V] Guerilla gig.

In addition to Basement Birds and his collaborations for the Bob Dylan and The Beatles White Album tours, Pyke has also featured in a number of songs with Australian and international artists:

"Bachelor Kisses" - Write Your Adventures Down: A Tribute to The Go-Betweens compilation album (2007)

"What You're Thinking" - Passenger - Flight Of The Crow

Josh has also co-written a number of songs including:

'Never in a Million Years' with Emma Birdsall

'All The Very Best Of Us' with Holly Thornsby

He also co-wrote Music Count Us Ins 2012 song Different People (Stand Together), which involved more than 500,000 students from around Australia

- No One Wants a Lover (2011): Nominated for Best Male Artist and Producer of the Year with Wayne Connolly

- The Beginning And The End Of Everything (2013): Nominated for Best Adult Contemporary Album

This article uses material from the article Josh Pyke from the free encyclopedia Wikipedia and it is licensed under the GNU Free Documentation License.