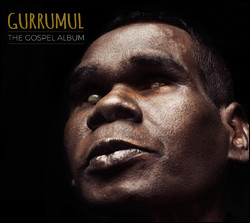 Geoffrey Gurrumul Yunupingu (born 1970) is an Indigenous Australian musician, who sings in the Yolngu language.

He was born in Galiwin'ku (Elcho Island), off the coast of Arnhem Land, Northern Australia about 580 kilometres from Darwin. He is from the Gumatj clan of the Yolngu and his mother is from the Galpu nation.[1] He was born blind, has never learned Braille and does not have a guide dog or use a white cane. Yunupingu speaks only a few words of English, and is said to be acutely shy.[2]

He plays drums, keyboards, guitar (a right hand-strung guitar left-handed) and didgeridoo, but it is the clarity of his singing voice that has attracted rave reviews. He sings stories of his land in both languages (Gälpu, Gumatj or Djambarrpuynu, all Yolu Matha) and English.[3] Formerly with Yothu Yindi, he is now with Saltwater Band.

In 2008 Yunupingu was nominated for four ARIA awards,[4] winning the awards for Best World Music Album[5] and Best Independent Release.[6] He also won three Deadlys, winning for Artist of the Year, Album of the Year for Gurrumul and Single of the Year for "Gurrumul History (I Was Born Blind)".[7]

His first solo album, Gurrumul, debuted at #21 on the ARIA Charts and #1 on the independent chart.[8] Gurrumul peaked at #3 on the ARIA Charts.[9] Geoffrey Gurrumul Yunupingu's friend Michael Hohnen produced the album and acts as his translator. Critics have heaped praise on the singer, describing his voice as having "transcendental beauty". Elton John, Sting and Björk are among his fans. When asked what he would do with any money he makes, he suggested it will go to his mother and aunts, following the Aboriginal tradition of sharing wealth.[2]

In 2009 a portrait of Gurrumul by Guy Maestri won Australia's major art prize, The Archibald Prize.[11]

He was again awarded the Jägermeister Australian Independent Record (AIR) Award for 'Best Independent Blues and Roots Album' in 2011 for his album RRAKALA.[12]

In 2012 Gurrumul was one of the contributing vocalists on Gary Barlow's commemorative single 'Sing' for Queen Elizabeth II's Diamond Jubilee celebrations, which features artists from across the Commonwealth. He performed 'Sing' live at the Diamond Jubilee Concert on Monday 4 June 2012 together with many of the song's contributing artists.[13]

In 2013, Gurrumul joined Delta Goodrem for a special performance of Bayini on The Voice Australia.[14]

Yolngu are deep thinking philosophical people. The words in the song refer to many families sitting together on the beach looking to waves and sea, the horizon, contemplating.[15]

This performance was in celebration of National Reconciliation Week. The single was released on 31 May and debuted at #4 on the ARIA singles charts. [16]

This article uses material from the article Geoffrey Gurrumul Yunupingu from the free encyclopedia Wikipedia and it is licensed under the GNU Free Documentation License.

Flight Of The Foo Birds Pat's Big Band
Update Required To play the media you will need to either update your browser to a recent version or update your Flash plugin.