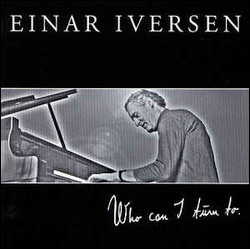 Einar «Pastor'n» Iversen (born 27 July 1930 in Mandal, Norway) is a Norwegian jazz musician (piano) and composer, the son of a «pastor», and went into jazz after the world war II ended. Through more than sixty years, he has played with everyone in Norwegian jazz.[1][2][3][4][5]

Iversen was raised in Oslo where he studied classical piano under Inge Rolf Ringnes, Artur Schnabel and Finn Mortensen, and quickly established himself at the Oslo jazz scene (1949). He released his first album with Rowland Greenberg's orchestra (1953), and became one of the most respected Norwegian jazz musicians, awarded Buddyprisen (1958).[1][2][4]

He played in a number of theaters, with Dizzy Gillespie at Birdland (1952), on the America Boat with Anthony Ortega (1954) and Modern Jazz Quartet (1955), and was a regular pianist at Metropol Jazz Club, where he played with jazz greats such as Dexter Gordon (1962), Coleman Hawkins (1963), Johnny Griffin (1964), and with Svend Asmussen and Stuff Smith in Sweden 1965. He recorded an album with his own trio ("Me and my piano" 1967, reissued 2010). He co-operation with Swedish Putte Wickman and Monica Zetterlund, and Povel Ramel on tour in 1978. In Norway, he participated in a number of releases with Bjarne Nerem, Egil Johansen, Totti Bergh, Nora Brockstedt and Ditlef Eckhoff.[2][5]

This article uses material from the article Einar Iversen from the free encyclopedia Wikipedia and it is licensed under the GNU Free Documentation License.