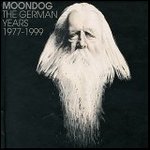 died on 8/9/1999 in Münster, Nordrhein-Westfalen, Germany

Moondog, born Louis Thomas Hardin (May 26, 1916  September 8, 1999), was a blind American composer, musician, poet and inventor of several musical instruments. Moving to New York as a young man, Moondog made a deliberate decision to make his home on the streets there, where he spent approximately twenty of the thirty years he lived in the city. Most days he could be found in his chosen part of town wearing clothes he had created based on his own interpretation of the Norse god Odin. Thanks to his unconventional outfits and lifestyle, he was known for much of his life as "The Viking of 6th Avenue".[1]

Born to an Episcopalian family in Marysville, Kansas, Hardin started playing a set of drums that he made from a cardboard box at the age of five. His family relocated to Wyoming and his father opened a trading post at Fort Bridger. Hardin attended school in a couple of small towns. At one point, his father took him to an Arapaho Sun Dance where he sat on the lap of Chief Yellow Calf and played a tom-tom made from buffalo skin.

Hardin played drums for the high school band in Hurley, Missouri before losing his sight in a farm accident involving a dynamite cap at the age of 16.[2] After learning the principles of music in several schools for blind young men across middle America, he taught himself the skills of ear training and composition. Principally self-taught, he studied with Burnet Tuthill and at the Iowa School for the Blind.

Hardin moved to Batesville, Arkansas where he lived until 1942, when he got a scholarship to study in Memphis, Tennessee. Although the majority of his musical training was self-taught by ear, he learned some music theory from books in braille there.

Hardin moved to New York in 1943, where he met noted classical music luminaries such as Leonard Bernstein and Arturo Toscanini, as well as legendary jazz performer-composers such as Charlie Parker and Benny Goodman, whose upbeat tempos and often humorous compositions would influence Hardin's later work.

From the late 1940s until 1974, Moondog lived as a street musician and poet in New York City, busking mostly on the corner of 53rd Street and 6th Avenue in Manhattan. He was not homeless however, or at least not oftenhe maintained an apartment in upper Manhattan for most of his life.[3] In addition to his music and poetry, he was also known for the distinctive fanciful "Viking" garb that he wore, which included a horned helmet. He partially supported himself by selling copies of his poetry and his musical philosophy. Because of his street post's proximity to the famed 52nd Street nightclub strip, he was well-known to many jazz musicians and fans.

In 1947 Hardin adopted the pen name "Moondog" in honor of a dog "who used to howl at the moon more than any dog I knew of." In 1949 he traveled to a Blackfoot Sun Dance in Idaho[4] where he performed on percussion and flute, returning to the Native American music he first came in contact with as a child. It was this Native music, along with contemporary jazz and classical, mixed with the ambient sounds from his environment (city traffic, ocean waves, babies crying, etc.) that created the foundation of Moondog's music.

In 1954, he won a case in the New York State Supreme Court against disc jockey Alan Freed, who had branded his radio show, "The Moondog Rock and Roll Matinee", around the name "Moondog", using "Moondog's Symphony" (the first record that Moondog ever cut) as his "calling card". Moondog believed he would not have won the case had it not been for the help of musicians such as Benny Goodman and Arturo Toscanini, who testified that he was a serious composer. Freed had to apologize and stop using the nickname "Moondog" on air, on the basis that Hardin was known by the name long before Freed began using it.[5][6]

Moondog had an idealised view of Germany ("The Holy Land with the Holy River"the Rhine), where he settled in 1974.

Eventually, a young German student[7] named Ilona Sommer (birth name: Goebel) helped Moondog set up the primary holding company for his artistic endeavors[8] and hosted him, first in Oer-Erkenschwick, and later on in Münster in Westphalia, Germany. Moondog lived with the family of Ilona Sommer and they spent time together in Münster. During that period Moondog created hundreds of compositions which were transferred from Braille to sheet music by Ilona Sommer. Moondog spent the remainder of his life in Germany where he died in 1999.

Moondog visited America briefly in 1989, for a tribute in which Philip Glass asked him to conduct the Brooklyn Philharmonic Chamber Orchestra, at the New Music America Festival in Brooklyn, stimulating a renewed interest in his music.

He recorded many albums, and toured both in the U.S. and in EuropeFrance, Germany and Sweden.

Moondog's music took its inspiration from street sounds, such as the subway or a foghorn. It tended to be relatively simple but characterized by what he called "snaketime" and described as "a slithery rhythm, in times that are not ordinary [...] I'm not gonna die in 4/4 time".[6]

Moondog's work was early championed by Artur Rodziski, the conductor of New York Philharmonic in the 1940s. He released a number of 78s, 45s and EPs of his music in the 1950s, as well as several LPs on a number of notable jazz labels, including an unusual record of stories and songs for children with Julie Andrews and Martyn Green, in 1957, called Songs of Sense and Nonsense - Tell it Again. For ten years no new recordings were heard from Moondog until producer James William Guercio took him into the studio to record an album for Columbia Records in 1969.

A second album produced with Guercio featured one of Moondog's daughters as a vocalist and contained song compositions in canons and rounds. The album did not make as large an impression in popular music as the first had. The two CBS albums were re-released as a single CD in 1989.

Most of Moondog's works are published by Managarm Musikverlag in Germany. By his last will the heritage of Moondog was administered and owned by Ilona Sommer, who died in September 2011. In her will she appointed the German lawyer Alexander Duve (Berlin, Germany) as the executor of her estate including the copyrights in Moondog's works, so he now administers Moondog's heritage.

Moondog also invented several musical instruments, including a small triangular-shaped harp known as the "oo", another which he named the "ooo-ya-tsu", and a triangular stringed instrument played with a bow that he called the "hüs" (after the Norwegian, "hus", meaning "house"). Perhaps his best known creation is the "trimba", a triangular percussion instrument that the composer invented in the late 40s. The original Trimba is still played today by Moondog's friend Stefan Lakatos, a Swedish percussionist, to whom Moondog also explained the methods for building such an instrument.

The music of Moondog of the 1940s and 50s is said to have been a strong influence on many early minimalist composers. Philip Glass has written that he and Steve Reich took Moondog's work "very seriously and understood and appreciated it much more than what we were exposed to at Juilliard."' [9]

Moondog inspired other musicians with several songs dedicated to him. These include "Moondog" on Pentangle's 1968 album Sweet Child and "Spear for Moondog" (parts I and II) by jazz organist Jimmy McGriff on his 1968 Electric Funk album. Glam rock icon Marc Bolan and T.Rex made reference to him in the song "Rabbit Fighter" with the line, "Moondog's just a prophet to the end.....". The English pop group Prefab Sprout included the song "Moondog" on their album Jordan: The Comeback released in 1990. Big Brother and the Holding Company featuring Janis Joplin covered the song "All Is Loneliness" on their 1967 self-titled album. The song was also covered by Antony and the Johnsons during their 2005 tour. Mr. Scruff's single "Get a Move On," from his album Keep It Unreal, is structured around samples from "Bird's Lament." New York band The Insect Trust play a cover of Moondog's song "Be a Hobo" on their album Hoboken Saturday Night. The track "Stamping Ground", with its odd preamble of Moondog saying one of his epigrams,[10] was featured on the sampler double album Fill Your Head with Rock (CBS, 1970). Canadian composer and producer Daniel Lanois included a track called "Moondog" on his album/video-documentary Here Is What Is.

with Julie Andrews and Martyn Green

Performed by other musicians

This article uses material from the article Moondog from the free encyclopedia Wikipedia and it is licensed under the GNU Free Documentation License.