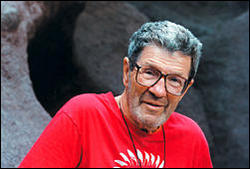 Joachim-Ernst Berendt (20 July 1922 in Berlin  4 February 2000 in Hamburg) was a German music journalist, book author and producer specialized on Jazz.

Berendt's father Ernst Berendt was a Protestant pastor belonging to the Confessing Church and was imprisoned and died in the Dachau concentration camp. J.-E. Berendt started studying Physics, but was interrupted by his enlistment to the Wehrmacht. Already during the Nazi Germany years Berendt took an interest in Jazz, which then had retreated to the underground.

After World War II he helped founding the Südwestfunk (SWF) radio network in the then French occupation zone of Germany. From 1950 till his retirement in 1987 he was in charge of the Jazz department of the SWF.

In 1952 the first German edition of Berendt's Jazz Book was published. It became a definitive book on Jazz translated into many languages and is still being updated and reprinted. For almost 40 years Berendt produced the Jazz program of the Baden-Baden station of the German public radio and TV network ARD. His weekly TV show Jazztime Baden-Baden and his daily radio shows were pioneer work in advancing and popularizing Jazz in post-war Germany. Berendt later focused on world music and was one of its early promoters.

Berendt was awarded, amongst others, the critic's award of German television, the culture award of Poland, and twice the Bundesfilmpreis.

Berendt died on 4 February 2000 at the age of 77 after a traffic accident which he was involved in as a pedestrian. The accident happened in Hamburg, Berendt was on his way to a book promotion for his book Es gibt keinen Weg nur Gehen (There Is No Way, Only Going).

Berendt's huge collection of records, books, magazines, photos and more is in the archive of the Jazzinstitut Darmstadt.

In 1983 Berendt published The World Is Sound: Nada Brahma and The Third Ear: On Listening to the World. In these books Berendt investigates in listening in general, i.e. its medical, historical, physical, cultural and philosophical aspects.

This turn to philosophy which also saw him becoming a disciple of Indian mystic Osho[1] was regretted by some of his readers, yet much appreciated by others. Berendt declared Jazz dead, which also provoked diverse reactions. He did not intend to turn against Jazz in general but to describe the advancement of musical expression to other directions. The World Is Sound is one of the most eminent works in the history of literature about the cosmos of the audible and everything dealing with sound and vibration. Being regarded as belonging to the New Age movement by many, Berendt however cites numerous well-known scientists and does a thorough research. He leaves the subject of Jazz to explore music in a more general sense. In his later age, Berendt considers music as an expression of human existence per se, comprehensible in the social and religious context.

This article uses material from the article Joachim-Ernst Berendt from the free encyclopedia Wikipedia and it is licensed under the GNU Free Documentation License.

Too Marvelous Martin Lechner
Update Required To play the media you will need to either update your browser to a recent version or update your Flash plugin.