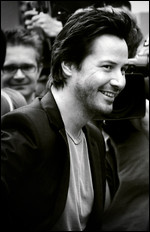 Keanu Charles Reeves (pronounced /kenu/ [kay-AH-noo, often mispronounced as kee-AH-noo]; born September 2, 1964) is a Lebanese-born Canadian-American actor, best known for his portrayals of a spaced-out metalhead in Bill & Ted's Excellent Adventure (which went on to become a cult classic) and in two action movie projects that were both financial and critical successes: the "ticking time bomb" thriller Speed and the science fiction-action trilogy The Matrix. He has worked under major directors, such as with Stephen Frears (in the 1988 period drama Dangerous Liaisons); Gus Van Sant (in the gritty 1991 independent film My Own Private Idaho (also written by Van Sant)); and Bernardo Bertolucci (in the 1993 film Little Buddha). His role as a rookie FBI agent in the 1991 surf drama Point Break (opposite Patrick Swayze) was praised by The New York Times critic Janet Maslin, who stated that Reeves "...displays considerable discipline and range.".[1]

In addition to his film roles, Reeves has also performed in theater. His performance in the title role in a Manitoba Theatre Centre production of Hamlet was praised by Roger Lewis, the Sunday Times, who called Reeves "...one of the top three Hamlets I have seen, for a simple reason: he * is* Hamlet." On January 31, 2005, Reeves received a star on the Hollywood Walk of Fame. In an ET online survey in 2006, he was included in the "Top Ten of America's Favorite Stars".

Reeves was born in Beirut, Lebanon, the son of Patricia Bond (née Taylor), a costume designer/performer, and Samuel Nowlin Reeves, Jr., a geologist.[2] Reeves's mother is English, and his father is an American of Hawaiian and Chinese descent. Reeves's mother was working in Beirut when she met his father. Reeves' father worked as an unskilled laborer and earned his GED while imprisoned in Hawaii for selling heroin at Hilo International Airport.[3] He abandoned his wife and family when Reeves was three years old, and Reeves does not currently have any relationship with him.[3] Reeves is named after his uncle, Henry Keanu Reeves. Keanu's name is translated as Hawaiian cool breeze over the mountains. When Reeves first arrived in Hollywood, his agent thought his first name was too exotic, so during the early days of his film career he was sometimes credited as K.C. Reeves. Reeves has one biological sister named Kim (born 1966 in Australia) who was diagnosed with leukemia in the early 1990s. Additionally, through his mother he has a half-sister named Karina Miller (born 1976 in Toronto) and through his father another half-sister named Emma Rose Reeves (born 1980 in Hawaiʻi).

Reeves moved around the world frequently as a child and he lived with various stepfathers. After his parents divorced in 1966, his mother became a costume designer and moved the family to Australia and then to New York City. There she met and married Paul Aaron, a Broadway and Hollywood director. The couple moved to Toronto but divorced in 1971. Reeves' mother married Robert Miller, a rock promoter, in 1976, but the couple divorced in 1980. She subsequently married her fourth husband, Jack Bond, a hairdresser, a marriage that broke up in 1994. Grandparents and nannies babysat Reeves and his sisters, and Reeves grew up primarily in Toronto. Within a span of five years, he attended four different high schools, including the Etobicoke School of the Arts, from which he was later expelled. Reeves has stated that he was expelled "...because I was greasy and running around a lot. I was just a little too rambunctious and shot my mouth off once too often. I was not generally the most well-oiled machine in the school. I was just getting in their way, I guess."

Reeves excelled more in hockey than in academics, as his educational development was challenged by dyslexia. He was a successful goalie at one of his high schools (De La Salle College "Oaklands"). His team nicknamed him "The Wall," and voted him MVP. While Reeves dreamed of becoming an Olympic hockey player for Canada , an injury ended his hopes for a hockey career. After leaving De La Salle College, he attended a free school (Avondale Alternative), which allowed him to obtain an education while working as an actor; he later dropped out, never obtaining his high school diploma.

Reeves began his acting career at the age of nine, appearing in a theater production of Damn Yankees. At 15, he played Mercutio in a stage production of Romeo and Juliet at the Leah Posluns Theatre. Reeves made his screen acting debut in a CBC Television comedy series entitled Hangin' In. Throughout the early 1980s, he appeared in commercials (including one for Coca-Cola), short films including the NFB drama One Step Away[4] and stage work such as Brad Fraser's cult hit Wolf Boy in Toronto. In 1984, he was a correspondent for the Canadian Broadcasting Corporation TV youth program Going Great.[5]

Reeves' first studio movie appearance was in the Rob Lowe ice hockey film Youngblood, in which he played a Québécois goalie. Shortly after the movie's release, Reeves drove to Los Angeles in his 1969 Volvo. His ex-stepfather Paul Aaron, a stage and television director, had convinced Erwin Stoff to be Reeves' manager and agent before he even arrived in Los Angeles. Stoff has remained Reeves' manager, and has coproduced many of his films. After a few minor roles, Reeves received a more sizable role in the 1986 drama film River's Edge, which depicted how a murder affected a group of teens. Following this film's critical success, he spent the late 1980s appearing in a number of movies aimed at teenage audiences, including Permanent Record, and the unexpectedly successful 1989 comedy, Bill & Ted's Excellent Adventure, which, along with its 1991 sequel, Bill & Ted's Bogus Journey, typecast Reeves as a space-out teen. Much of his portrayal in the press and much of the response to his acting in the early 1990s has still referenced his portrayal of the airheaded Ted.

During the early 1990s, Reeves started to break out of his teen-film period. He appeared in high-budget action films like Point Break, for which he won MTV's "Most Desirable Male" award in 1992. He was also involved in various lower-budget independent films, including the well-received 1991 film, My Own Private Idaho with his close friend, the late River Phoenix. In 1994, Reeves' career reached a new high as a result of his starring role in the action film Speed. His casting in the film was controversial since, except for Point Break, he was primarily known for comedies and indie dramas. He had never been the sole headliner on a film. The summer action film had a fairly large budget and was helmed by novice cinematographer-turned-director Jan de Bont. The unexpected international success of the film made Reeves and co-star Sandra Bullock into A-List stars.

Reeves' career choices after Speed were eclectic: despite his successes, Reeves continued to accept supporting roles and appear in experimental films. He scored a hit with a romantic lead role in A Walk in the Clouds. He made news by refusing to take part in Speed 2: Cruise Control and choosing to play the title role in a Manitoba Theatre Centre production of Hamlet in Winnipeg, Manitoba. Reeves got surprisingly good reviews for his interpretation of one of Shakespeare's most famous characters. Roger Lewis, the Sunday Times critic, wrote, "He quite embodied the innocence, the splendid fury, the animal grace of the leaps and bounds, the emotional violence, that form the Prince of Denmark...He is one of the top three Hamlets I have seen, for a simple reason: he * is* Hamlet."

Reeves' other choices after A Walk in the Clouds, however, failed with critics and audiences. Big-budget films such as the sci-fi action film Johnny Mnemonic and the action-thriller Chain Reaction were critically panned and failed at the box office, while indie films like Feeling Minnesota were also critical failures. Reeves started to climb out of his career low after starring in the horror/drama The Devil's Advocate alongside Al Pacino and Charlize Theron. Reeves deferred his salary for The Devil's Advocate so that Pacino would be cast, as he would do later for the less successful The Replacements, guaranteeing the casting of Gene Hackman. The Devil's Advocate did well at the box office, received good reviews, and proved that Reeves could play a grown-up with a career although many critics felt that his poor performance detracted from an otherwise enjoyable movie. The 1999 science fiction-action hit The Matrix, a film in which Reeves had a starring role, was a box office success and attracted positive reviews.

In between the first Matrix film and its sequels, Reeves received positive reviews for his portrayal of an abusive husband in The Gift. Aside from The Gift, Reeves appeared in several films that received mostly negative reviews and unimpressive box office grosses, including The Watcher, Sweet November and The Replacements. However, the two Matrix sequels, The Matrix Reloaded and The Matrix Revolutions, Something's Gotta Give, and the 2005 horror-action film, Constantine, proved to be box office successes and brought Reeves back into the public spotlight. His appearance in the 2006 film, A Scanner Darkly, based on the dystopian science fiction novel by Philip K. Dick, received favorable reviews, and The Lake House, his romantic outing with Sandra Bullock, did not do well at the box office.

Reeves played the main character in two 2008 films, Street Kings and The Day the Earth Stood Still. In February 2009 The Private Life of Pippa Lee -where Reeves starred alongside with Robin Wright Penn, Julianne Moore, Alan Arkin, Winona Ryder, Maria Bello, Monica Bellucci, Zoe Kazan, Ryan McDonald, Blake Lively, Robin Weigert-, was presented at Berlinale. In January 2009, it was revealed that Reeves will star in the live-action film adaptation of the anime series Cowboy Bebop,[6][7] slated for release in 2011. Other upcoming projects include the samurai film 47 Ronin, Chef - story by Reeves and written by Steven Knight - and as producer and star for the space drama Passengers, written by Jon Spaihts.[8]

Personal life and other interests

For nearly a decade following his initial rise to stardom, Reeves preferred to live in rented homes and hotels and was a long term resident of the Chateau Marmont. Reeves bought his first house in the Hollywood Hills of Los Angeles around 2003, and also has an apartment on Central Park West in New York City. Although born in Lebanon, Reeves is not a Lebanese citizen. His citizenships are: U.S. (through his father)[9] and Canadian (by naturalization). Since April 30, 2003, he has also been entitled to British citizenship by having an English-born mother. Reeves grew up as a Canadian and identifies as such. He has never married. In December 1999, Reeves' girlfriend Jennifer Syme gave birth to a stillborn daughter who was named Ava Archer Syme-Reeves. In April 2001, Syme was killed in a car accident.[10] She was buried next to their daughter in the Westwood Village Memorial Park Cemetery in Los Angeles, California. In 2008 Reeves was sued, unsuccessfully in Los Angeles Superior Court for $711,974[11] by paparazzo Alison Silva for allegedly hitting and injuring him with his Porsche after visiting a relative at a Los Angeles medical facility.[12][13] The paparazzo's lawsuit took a year and a half to make it to trial, with all 12 jurors rejecting the case in just over an hour.[14] Reeves also has musical interests: he played bass guitar in the grunge band Dogstar during the 1990s, and in the 2000s, he has performed with the band Becky.

This article uses material from the article Keanu Reeves from the free encyclopedia Wikipedia and it is licensed under the GNU Free Documentation License.

Suey Ladwig's Dixieland Kapelle
Update Required To play the media you will need to either update your browser to a recent version or update your Flash plugin.