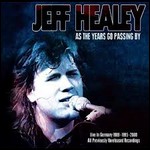 Norman Jeffrey "Jeff" Healey (March 25, 1966 March 2, 2008) was a blind Canadian jazz and blues-rock vocalist and guitarist who attained musical and personal popularity, particularly in the 1980s and 1990s.

Born in Toronto, Ontario, Healey was raised in the city's west end. He was adopted as an infant;[1] his adoptive father was a firefighter. When he was almost one year old, Healey lost his sight to retinoblastoma, a rare cancer of the eyes. His eyes had to be surgically removed, and he was given ocular prostheses.

Healey began playing guitar when he was three, developing his unique style of playing the instrument flat on his lap. When he was 15,[2] Jeff Healey formed the band Blue Direction, a four-piece which primarily played bar-band cover tunes and featured bassist Jeremy Littler, drummer Graydon Chapman, and a schoolmate, Rob Quail on second guitar. This band played various local clubs in Toronto, including the Colonial Tavern.

Healey began hosting a jazz and blues show on radio station CIUT-FM where he became known for playing from his massive collection of vintage 78 rpm gramophone records.[3]

Shortly thereafter he was introduced to two musicians, bassist Joe Rockman and drummer Tom Stephen, with whom he formed a trio, The Jeff Healey Band. This band made their first public appearance at the Birds Nest, located upstairs at Chicago's Diner on Queen Street West in Toronto. They received a write-up in Toronto's NOW magazine, and soon were playing almost nightly in local clubs, such as Grossman's Tavern and the famed blues club Albert's Hall (where Jeff Healey was discovered by guitarists Stevie Ray Vaughan and Albert Collins).

After being signed to Arista Records in 1988, the band released the album See the Light, featuring the hit single "Angel Eyes" and the song "Hideaway", which was nominated for a Grammy Award for Best Rock Instrumental Performance. While the band was recording See the Light, they were also filming (and recording for the soundtrack of) the Patrick Swayze film Road House.[4] Healey had numerous acting scenes in the movie with Swayze, as his band was the house cover band for the bar featured in the movie. In 1990, the band won the Juno Award for Canadian Entertainer of the Year. The albums Hell to Pay and Feel This gave Healey 10 charting singles in Canada between 1990 and 1994, including a cover of The Beatles' While My Guitar Gently Weeps which featured George Harrison and Jeff Lynne on backing vocals and acoustic guitar.[5]

By the release of the 2000 album Get Me Some, Healey began to concentrate his talent in a different musical direction closer to his heart, the appreciation for another original American music form, jazz.

He went on to release three CDs of music of traditional American jazz from the 1920s and 1930s. He had been sitting in with these types of bands around Toronto since the beginning of his music career. Though known primarily as a guitarist, Healey also played trumpet during live performances. His main jazz group for touring and recording being Jeff Healey's Jazz Wizards.

Healey was an avid record collector and amassed a collection of well over 30,000 78 rpm records. He had, from time to time, hosted a CBC Radio program entitled My Kind of Jazz, in which he played records from his vast vintage jazz collection. He hosted a program with a similar name on Toronto jazz station CJRT-FM; as of 2010, the latter program continued to air in repeats.

For many years, Healey toured throughout North America and Europe and performed at his club, "Healey's" on Bathurst Street in Toronto, where he played with his blues band on Thursday nights and also with his jazz group on Saturday afternoons. The club moved to a bigger location at 56 Blue Jays Way and was rechristened "Jeff Healey's Roadhouse." Though he had lent his name to the club and often played there, Jeff Healey did not own or manage the bar. (The name came from the 1989 film, Road House, in which Healey appeared.)

At the time of his death, he had been planning to perform a series of shows in the United Kingdom, Germany, and the Netherlands with his other band, the 'Jeff Healey Blues Band' (aka the 'Healey's House Band') in April 2008.

Healey discovered and helped develop the careers of other musical artists, including Terra Hazelton and Amanda Marshall.[6]

On January 11, 2007, Healey underwent surgery to remove metastatic tissue from both lungs. In the previous eighteen months, he had two sarcomas removed from his legs.[8]

On March 2, 2008, Healey died of cancer[9] at St. Joseph's Health Centre in his home town of Toronto.[10] He was 41 years old. His death came a month before the release of Mess of Blues, which was his first rock/blues album in eight years.[11]

Healey is survived by his wife, Cristie, and two children.[12] A tribute concert was held on May 3, 2008, to benefit Daisy's Eye Cancer Fund, which, according to Cristie Healey, had helped make major strides in research and future advances for people born with the same genetically inherited retinoblastoma[13] which led to Healey's blindness at eleven months of age. Cristie and Jeff Healey's son was also born with the same disability.[14]

In 2009, Healey was inducted into the Terry Fox Hall of Fame.

In June 2011, Woodford Park in Toronto was renamed Jeff Healey Park in his honour.

In October 2012, his family launched the 'all-new' official website at Jeffhealey.com.[15]

This article uses material from the article Jeff Healey from the free encyclopedia Wikipedia and it is licensed under the GNU Free Documentation License.

Don't Be That Way Pepe Lienhard
Update Required To play the media you will need to either update your browser to a recent version or update your Flash plugin.