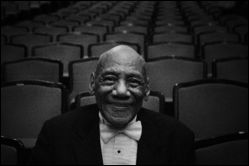 Cándido de Guerra Camero (born April 22, 1921), also known simply as Cándido, is a Cuban conga and bongo player. He also plays the tres, drums, and acoustic bass. He has worked in many genres of popular music from pop, rock, R&B and disco to Afro-Cuban dance music and Latin jazz. He is the first player to develop techniques to play multiple conga drums, coordinated independence and the use of multiple percussion, one player playing a variety of percussion instruments simultaneously.

Early in his career, Camero recorded in his native Cuba with many of the early pioneers of the son movement as well as being the conga drummer for the Tropicana night club in Havana from its opening night in 1940 and subsequently for the next eight years. He first appeared in NYC in the musical review, Tidbits, at the Plymouth Theater on Broadway in 1946 backing up the Cuban dance team of Carmen and Rolando. In 1948 he made his first U.S. recording with Machito and His Afro-Cubans on the tune, "El Rey Del Mambo." as well as working with Dizzy Gillespie. During 1953–54, he was in the Billy Taylor Trio and in 1954 he performed and recorded with Stan Kenton.[1][2]

He also enjoyed success during the disco era of the 1970s, most notably with the Babatunde Olatunji-penned track "Jingo" from his Dancin' and Prancin' album, which he recorded for Salsoul Records in 1979. The album has also been acknowledged as an influence and precursor to house music, predating the emergence of the genre by over five years.[3]

Camero was honored with the National Endowment for the Arts Jazz Masters Award in 2008.[4]

With the Lecuona Cuban Boys

With Norman Granz' Jazz at the Philharmonic

This article uses material from the article Candido Camero from the free encyclopedia Wikipedia and it is licensed under the GNU Free Documentation License.