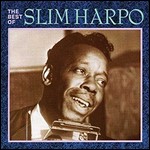 James Isaac Moore (January 11, 1924 – January 31, 1970),[1][nb 1] better known by his stage name Slim Harpo, was an American blues musician, a leading exponent of the swamp blues style, and "one of the most commercially successful blues artists of his day".[2] His most successful and influential recordings included "I'm a King Bee" (1957), "Rainin' In My Heart" (1961), and "Baby Scratch My Back" (1966) which reached no. 1 on the R&B chart and no.16 on the US pop chart. A master of the blues harmonica, his stage name was derived from the popular nickname for that instrument, the "harp".[3]

Moore was born in Lobdell, Louisiana,[4] the eldest child in his family. After his parents died he worked as a longshoreman and construction worker in New Orleans in the late 1930s and early 1940s. Influenced in style by Jimmy Reed, he began performing in Baton Rouge bars under the name Harmonica Slim, and also accompanied his brother-in-law Lightnin' Slim in live performances.[1][2][5][6][7]

He started his own recording career in March 1957, working with the A&R man and record producer J. D. "Jay" Miller in Crowley, Louisiana.[8] At his wife's suggestion, he took the name Slim Harpo in order to differentiate himself from another performer called Harmonica Slim.[9] His first solo release, for Excello Records, based in Nashville, Tennessee, was "I'm a King Bee", backed with "I Got Love If You Want It" in 1957. The other musicians on the recording were Gabriel "Guitar Gable" Perrodin (guitar), John "Fats" Perrodin (bass), and Clarence "Jockey" Etienne (drums).[8] Harpo played guitar in his live shows, but he usually used other guitarists when recording.[10] The record was a regional hit but failed to make the national charts.[5] He followed up with several more singles for Excello before having his first chart hit, "Rainin' in My Heart", in early 1961. The record reached number 17 on the Billboard R&B chart and number 34 on the U.S. pop chart,[11] and it was followed soon after with an LP of the same name and additional singles. Many of his songs were co-written with his wife, Lovelle Moore, although she never received credit.[7][9]

Never a full-time musician, Harpo had his own trucking business during the 1960s.[7] According to writer Ryan Whirty, "Harpo and his band needed to tour constantly and play as much as possible; times were frequently lean financially, and the men had to scrape up whatever they could get."[2] But, by 1964, several of his tracks had been released on albums and singles in the UK,[8] and British rock bands like the Rolling Stones, the Pretty Things, the Yardbirds, the Kinks, Pink Floyd and Them began to feature versions of his songs in their early repertoires. The Moody Blues reportedly took their name from an instrumental track of Slim's called "Moody Blues".[7]

Writer Cub Koda noted that: "Harpo was more adaptable than [Jimmy] Reed or most other bluesmen. His material not only made the national charts, but also proved to be quite adaptable for white artists on both sides of the Atlantic... A people-pleasing club entertainer, he certainly wasn't above working rock & roll rhythms into his music, along with hard-stressed, country & western vocal inflections... By the time his first single became a Southern jukebox favorite, his songs were being adapted and played by white musicians left and right. Here was good-time Saturday-night blues that could be sung by elements of the Caucasian persuasion with a straight face."[1]

He had his biggest commercial success in 1966, when the predominantly instrumental "Baby Scratch My Back" reached no.1 on the R&B chart and no.16 on the US pop chart. Harpo described it as "an attempt at rock & roll for me." Like his previous records, it was recorded with producer J. D. Miller and the regular Excello musicians, including guitarist Rudy Richard, bassist James Johnson and drummer Jesse Kinchen, in Crowley, Louisiana.[2][8] However, disagreements with Miller and a change in the record company's ownership led to two follow-ups, "Tip On In" and "Tee-Ni-Nee-Ni-Nu", being recorded in Nashville with new producer Robert Holmes.[5] Both made the R&B charts.[11] He recorded his 1968 album Tip On In in Nashville, using musicians Charles Hodges (organ), Mabon "Teenie" Hodges (guitar); Leroy Hodges (bass) and Howard Grimes (drums), who later became more widely known as the Hi Rhythm Section. He also recorded versions of Charlie Rich's "Mohair Sam" and Johnny Cash's "Folsom Prison Blues".[8]

He recruited Lightnin' Slim to his touring band in 1968,[5] and toured widely in the late 1960s, mainly reaching rock audiences. In January 1970, with his first scheduled tour of Europe and recording sessions planned, he died suddenly in Baton Rouge, of a heart attack, twenty days after his 46th birthday, despite being "one of the cleanest living bluesmen of his era".[1][9][12] He was buried in Mulatto Bend Cemetery in Port Allen, Louisiana.[13]

The riff from Harpo's 1966 hit "Shake Your Hips", which itself was derivative of Bo Diddley's "Bring It to Jerome", was used in the ZZ Top 1973 hit "La Grange", and the Rolling Stones covered the song on their 1972 album Exile on Main St..[14] "Shake Your Hips" was also covered by Joan Osborne on her 2012 album Bring It On Home.[15] Other notable covers of Slim Harpo songs include "I Got Love If You Want It" by the Kinks, "Zoot Suit/I'm the Face" by the Who (when they were still called the High Numbers), "I'm A King Bee" by the Rolling Stones,[16] Muddy Waters,[17] the Grateful Dead,[18] Pink Floyd and the Doors,[19] and "Don't Start Crying Now" by Them with Van Morrison.[20] In 2012 a Jack Daniel's Tennessee Honey Whiskey commercial featured Harpo's song "I'm a King Bee" covered by San Francisco blues band the Stone Foxes.

The Slim Harpo Music Awards, awarded annually in Baton Rouge, are named in his honour. Proceeds from the awards benefit the "Music in the Schools" outreach program.[21]

2016 saw the release of Slim Harpo: Blues King Bee of Baton Rouge by UK blues scholar Martin Hawkins. David Fricke of Rolling Stone magazine described the work: ".. a passionate, encyclopedic triumph, bringing the enigmatic Harpo to life and tracing his remarkable mainstream ascension – from the rich central-Louisiana blues scene to gigs at the Fillmore East – with deep local research and detailed portraits of the singer's peers, sidemen and record-business associates."[22]

This article uses material from the article Slim Harpo from the free encyclopedia Wikipedia and it is licensed under the GNU Free Documentation License.

Polkadots & Moonbeams Paradox Jazz Band
Update Required To play the media you will need to either update your browser to a recent version or update your Flash plugin.