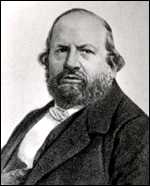 Ferdinand Hiller was born to a wealthy Jewish family in Frankfurt am Main, where his father Justus (originally Isaac Hildesheim, a name that he changed late in the 18th century to conceal his Jewish origins)[1] was a merchant in English textiles – a business eventually continued by Ferdinand’s brother Joseph. Hiller’s talent was discovered early and he was taught piano by the leading Frankfurt musician Alois Schmitt, violin by Jörg Hofmann, and harmony and counterpoint by Georg Jacob Vollweiler; at 10 he performed a Mozart concerto in public; and two years later, he produced his first composition.[2]

In 1822, the 13-year-old Felix Mendelssohn entered his life. The Mendelssohn family was at that time staying briefly in Frankfurt and the young Hiller visited them where he was immensely impressed by the playing of Felix (and even more so by that of his sister Fanny Mendelssohn). When their acquaintance was renewed in 1825 the two boys found an immediate close friendship, which was to last until 1843. Hiller tactfully describes their falling out as arising from "social, and not from personal susceptibilities." But in fact it seems to have been more to do with Hiller’s succession to Mendelssohn as director of the Leipzig Gewandhaus Orchestra in 1843.

From 1825 to 1827, Hiller was a pupil of Johann Nepomuk Hummel in Weimar; while he was with Hummel at Beethoven’s deathbed, Hiller secured a lock of Beethoven's hair. This lock is now at the San Jose State University, after having been sold at Sotheby's in 1994. While in Vienna for Beethoven's obsequies, Hiller and Hummel heard Johann Michael Vogl and Franz Schubert perform Schubert's Winterreise. Hiller wrote that his master was so moved that tears fell from his eyes.[3][4]

From 1828 to 1835, Hiller based himself in Paris, where he was engaged as teacher of composition at Choron's School of Music. He eventually gave up his position so that he might better equip himself as a pianist and composer.[2] He spent time in Italy, hoping that this would assist him to write a successful opera (a hope which was never fulfilled). In 1836, he was in Frankfurt devoting himself to composition. His abilities were recognized, and although but 25, he was asked to act as conductor of the Cäcilienverein during the illness of its conductor Schelble.[2]

In addition to Mendelssohn, he attracted the attention of Rossini who assisted him to launch his first opera, Romilda (which was a failure), at Milan. Mendelssohn obtained for Hiller an entrée to the Gewandhaus, and afforded an opportunity for the public presentation of Hiller's oratorio Die Zerstörung Jerusalems (The Destruction of Jerusalem, 1840). After a year of study in Church music at Rome, Hiller returned to Leipzig, and during the season of 1843-44 conducted the Gewandhaus concerts. By this time his position in the musical world was established, and honors and appointments were showered upon him. In 1845 Robert Schumann dedicated to Hiller his piano concerto. Hiller became municipal kapellmeister of Düsseldorf in 1847, and in 1850 received a similar appointment at Cologne,[2] where he founded Cologne Conservatoire that year and remained as Kapellmeister until 1884. During this time, he was twelve times festival director of the Lower Rhenish Music Festival, and conducted the Gürzenich concerts. He worked in Dresden as well. Thus he played a leading part in Germany's musical life. And he was conductor at the Italian Opera in Paris during the season of 1852-53.[2]

During Hiller’s long reign in Cologne, which earned him a ‘von’ to precede his surname, his star pupil was Max Bruch, the composer of the cello elegy Kol Nidrei, based on the synagogue hymn sung at Yom Kippur. Bruch was not Jewish; his knowledge of the theme of Kol Nidrei came through Hiller, who introduced him to the Berlin chazan, Lichtenstein. Hiller’s regime at Cologne was strongly marked by his conservative tastes, which he attempted to prolong by recommending, as his successor in 1884, either Brahms or Bruch. The appointment went however to a "modernist", Franz Wüllner, who, according to Grove "initiated his term [...] with concerts of works by Wagner, Liszt and Richard Strauss, all of whom Hiller had avoided." [5]

Hiller was elected a member of the Prussian Academy of Arts in 1849, and in 1868 received the title of doctor from the University of Bonn.[2] He died in Cologne.

Hiller’s affability was one of his strongest assets; he made innumerable friends and his very extensive correspondence with all the leading musicians in Europe, still only partly published, is an important source for the musical history of his era. Yet another asset was his very beautiful wife Antonka, by profession a singer, whom he married in Italy in 1840, and who made their home a magnet for the intelligentsia wherever they settled.

Hiller’s time in Dresden marked his initial encounters with Richard Wagner, who had become deputy Kapellmeister there in 1843, following the success of the premiere of his Rienzi (staged in Dresden the previous year). In his autobiography, written during 1865-70 when he was settling scores, real and imaginary, following the death of Giacomo Meyerbeer, Wagner is typically patronising about Hiller at this period, who, we are told, "behaved in a particularly charming and agreeable manner during those days." Antonka is described as "an extraordinary Polish Jewess who had caused herself to be baptised a Protestant together with her husband"; she is later shown as "enlist[ing] the support of a large number of her compatriots [...] for the opera of her husband." (The opera was Hiller’s Konradin).

Wagner’s dismissive remarks on Hiller throughout his autobiography Mein Leben and in his later review of Hiller’s autobiography are not however representative of his relationship with Hiller as revealed through other documents. Wagner features quite frequently in Hiller’s diary for the period. Amongst such notes are:

and so forth. Hiller assisted with the staging of Tannhäuser in Dresden in October 1845. In November 1846 Hiller went to see Tannhäuser and notes "Mendelssohn is sitting in front of us" (but presumably no conversation took place). In 1847 he discusses his draft of Konradin with Wagner.

The discussion about Wagner’s "affairs" and religion in 1845 must have been interesting; we know from correspondence that in the same month, Wagner attempted to borrow 2,000 thalers from Hiller; Hiller’s apparent demurral did not however prevent Wagner recommending Hiller in June to the Dresden Court official Klemm as a potential composer to a libretto.

Hiller’s vast musical output is now more or less forgotten. It contained works in virtually every genre, vocal, choral, chamber and orchestral. Musically he is perhaps best remembered as the dedicatee of Schumann’s Piano Concerto. He is also the dedicatee of the three Nocturnes, Op. 15, by Chopin.

His large output of chamber music includes several quartets for strings with and without piano beginning with his piano quartet opus 1 in B minor, published by Haslinger of Vienna in the 1830s, and at least three string quartets, a string trio published posthumously as opus 207 in 1886 by Rieter-Biedermann of Leipzig, sonatas for solo piano (opus 47, published in 1852 by Schuberth of Hamburg and opus 59) and for piano with cello (at least two – opus 22, published by Simrock, and opus 174, published by Cranz), and a piano quintet (opus 156), among other works.[8][9] The fourth of his piano trios has been recorded along with the early piano trio of Max Bruch.

He was also a very successful lecturer and a forceful writer, his contributions to reviews and newspapers having been since collected in book form. He also published among others: Musikalisches und Persönliches (1870), Wie hören wir Musik? (How do we hear [or: listen to] music?, 1880); Goethes musikalisches Leben (Goethe's musical life, 1880); and Erinnerungsblätter (Reminiscences, 1884).[2] He published an account of his friendship with Mendelssohn in 1874. Part of his vast correspondence with other musicians and artists of his period, which is in itself an important historical archive, has been published in seven volumes.

Amongst recordings of Hiller's music are:

This article uses material from the article Ferdinand Hiller from the free encyclopedia Wikipedia and it is licensed under the GNU Free Documentation License.

Autumn Leaves Hammond Lounge
Update Required To play the media you will need to either update your browser to a recent version or update your Flash plugin.