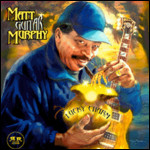 Matthew Murphy was born in Sunflower, Mississippi, United States, and was educated in Memphis, where his father worked at the Peabody Hotel. Murphy learned to play guitar when he was a kid. In 1948 he moved to Chicago where he joined the Howlin' Wolf band, which at the time featured harpist Little Junior Parker.[1]

Murphy worked a lot with Memphis Slim, including on his album At The Gate of Horn (1959).[2] Murphy did not have a band of his own until 1982, but did session work both in studio and on stage with many musicians, including Ike Turner, Muddy Waters, James Cotton, Otis Rush, Etta James, Sonny Boy Williamson II, Chuck Berry and Joe Louis Walker.

He gave a memorable performance in 1963 on the American Folk Blues Festival tour of Europe with his "Matt's Guitar Boogie".[3] Freddie King is said to have once admitted that he based his "Hide Away" on Murphy's playing during this performance.[4]

Murphy has been less active since he suffered a stroke on stage while performing in Nashville in 2003he finished his set performing with one hand. A benefit was mounted by notable musicians of Memphis and Nashville. He has recently been playing in Florida with two young protégés Tim O'Donnell and Darrell Raines, and performed with his nephew Floyd in the Florida Keys during 2009.

He has been on the comeback trail with a reunion performance with James Cotton at the 2010 Chicago Blues Festival. A September 2011 release took place of a 1986 live recording from the 40 Watt Club in Athens, Georgia. Patton Biddle recorded the show live, and Floyd Murphy Jr., Matt's nephew, played the drums along with Howard Eldridge on vocals.[5] He also recently appeared in April of 2013 at Eric Claptons Crossroads Guitar Festival at MSG in NYC.

This article uses material from the article Matt Murphy (blues guitarist) from the free encyclopedia Wikipedia and it is licensed under the GNU Free Documentation License.

Topsy Coolbreeze
Update Required To play the media you will need to either update your browser to a recent version or update your Flash plugin.