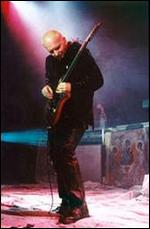 Reeves Gabrels (born June 4, 1956) is an American guitarist, "one of the most daring rock-guitar improvisers since Jimi Hendrix - an opinion some players formed during his dozen years collaborating with British singer David Bowie." [1] Best known for his long partnership with Bowie, with whom he worked regularly from 1987 to 1999, Gabrels also built an active performing and recording career before, during and since, working both independently and in collaboration with musicians worldwide. He has lived in New York, Boston, London and Los Angeles, and since 2006 he has been based in Nashville, Tennessee.

Gabrels' songs and improvisations defy genre, ranging from "hard-hitting blues rock to 21st century electronica," to quote Guitar World's characterization of Ulysses, an album from 2000.[2] He is recognized for virtuosity and versatility, a guitar player who can "explore sonic extremes with a great, adaptive intuition for what each song needs most." [3]

In 2012 he joined The Cure for their summer tour and will be with the band again in Spring 2013 for their eight night tour of Latin America.

Reeves Gabrels was born in Staten Island, New York in June 1956. His mother was a typist and his father worked on tugboats in New York Harbor. Gabrels started playing guitar at age 13, and the following year (1971) his father arranged for lessons with the father's friend and contemporary Turk Van Lake, who lived in the neighborhood. Van Lake was a professional musician who had played with Benny Goodman and others.[4]

After high school, Gabrels attended the Parsons School of Design and the School of Visual Arts in New York City but continued to play guitar. Through some session musician work he met noted jazz guitarist John Scofield,[5] from whom he took a lesson or two. Gabrels moved to Boston to attend the Berklee School of Music, which he left several credits short of a degree in 1981.

Gabrels had an active performing career in Boston before and after his professional association with David Bowie began in the late 1980s. During the 1980s and early 1990s Gabrels was a member of such Boston bands as The Dark, Life on Earth, The Atom Said, Rubber Rodeo, The Bentmen and Modern Farmer. Modern Farmer (Gabrels, Jamie Rubin, David Hull, and Billy Beard) issued a self-titled record on Victory/Universal in 1993.

David Bowie and Reeves Gabrels met in 1987 during a Bowie tour for which Sara Terry, Gabrels' then-wife, worked as publicist. Gabrels later (1989-1993) joined forces with Bowie and the Sales brothers (drummer Hunt Sales and bass player Tony Sales) in the rock band Tin Machine. Later, Gabrels became an essential part of Bowie's nineties sound, most notably on Outside (1995), Earthling (1997), and 'hours...' (1999), the latter two of which he co-produced. "Dead Man Walking," a Bowie/Gabrels song from Earthling, was nominated for a Grammy award. Gabrels and Bowie also created the soundtrack to the computer game Omikron: The Nomad Soul in 1999 for the game's French publisher. Gabrels ended his professional association with Bowie in late 1999.

Gabrels has written soundtracks for films including David Sutherland's The Farmer's Wife (premiered on PBS September, 1998)[6] and for PBS productions, and collaborated with Public Enemy on the song "Go Cat Go" for the Spike Lee film He Got Game (soundtrack, Def Jam, 1998). He wrote the "club music" portions of the soundtrack for the video game Deus Ex.[7]

Slide guitarist David Tronzo and Reeves Gabrels made a virtuoso-duo instrumental album, Night in Amnesia, issued by Rounder Records in 1995. Gabrels also worked with Robert Smith of The Cure during the 1990s, collaborating on The Cure's track "Wrong Number" and "A Sign From God" (as COGASM) as well as co-writing the song "Yesterday's Gone" which Smith sings on Gabrels' album Ulysses.

Gabrels joined The Cure on stage throughout their summer tour of 2012, the set for which includes "Wrong Number" which he collaborated with The Cure on in 1997[9]

Guitars: Gabrels has used different guitars at varied phases in his musical career, selecting instruments to suit the music. He has favored Steinberger guitars, the Parker Fly, and Fernandes Guitars, but also plays Gibson Guitars such as the Les Paul and the Flying V, as well as Fender's Stratocaster.

He has often chosen innovative, less well known makers, explaining in interviews that he prefers a guitar without a set history and with which he is free to create sounds of his own imagination.[1]

In 2008, Gabrels began playing Reverend guitars, made by Reverend Musical Instruments of Warren, Michigan. Gabrels and Reverend have collaborated to develop a Reverend Reeves Gabrels Signature Model guitar.[10] There are now several versions, the first featured at the winter 2010 NAMM Show in Los Angeles and the most recent to be released at NAMM in Nashville in 2012.[11]

During The Cure's SummerCure Tour, Robert Smith gave Gabrels his Fender Bass VI in order for him to play songs such as Primary, Inbetween Days and Push.

This article uses material from the article Reeves Gabrels from the free encyclopedia Wikipedia and it is licensed under the GNU Free Documentation License.

Todo tiene su final Lauren Henderson
Update Required To play the media you will need to either update your browser to a recent version or update your Flash plugin.