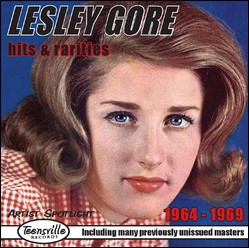 Gore also worked as an actress and composed songs with her brother, Michael Gore, for the 1980 film Fame, for which she was nominated for an Academy Award. She hosted an LGBT-oriented public television show, In the Life, on American TV in the 2000s, and was active until 2014.

She was born Lesley Sue Goldstein[1] in Brooklyn, New York City,[2] into a Jewish family, the daughter of Leo Goldstein and Ronny Gore. Her father was the owner of Peter Pan, a children's swimwear and underwear manufacturer,[3] and later became a leading brand licensing agent in the apparel industry.[4] She was raised in Tenafly, New Jersey,[5] and attended the Dwight School for Girls in nearby Englewood.

When she recorded her version of "It's My Party" with Quincy Jones in 1963, she was a junior in high school. It became a number-one, nationwide hit. Gore's version sold over one million copies and was certified as a gold record.[6] It also marked the beginning of a time when fans would show up on her front lawn.[2]

Gore was given first shot at recording "A Groovy Kind of Love" by songwriters Carole Bayer and Toni Wine with a melody borrowed from a sonatina by Muzio Clementi,[8] but Shelby Singleton, a producer for Mercury subsidiary Smash Records, refused to let Gore record a song with the word "groovy" in its lyrics.[7] The Mindbenders went on to record it, and it reached No. 2 on the Billboard charts.[9]

Gore recorded composer Marvin Hamlisch's first hit composition, "Sunshine, Lollipops and Rainbows", on May 21, 1963, while "It's My Party" was climbing the charts.[7] Her record producer from 1963 to 1965 was Quincy Jones. Jones' dentist was Marvin Hamlisch's uncle, and Hamlisch asked his uncle to convey several songs to Jones.[7] "Sunshine, Lollipops and Rainbows" was released on the LP Lesley Gore Sings of Mixed-Up Hearts, but did not surface as a single until June 1965.[7] Hamlisch composed three other Gore associated songs: "California Nights",[10] "That's the Way the Ball Bounces" and "One by One". "That's the Way the Ball Bounces" was recorded September 21, 1963, at A&R Studios in New York; it was released as the B-side of "That's the Way Boys Are" and appeared on the LP Boys Boys Boys. "One by One" was an unreleased track recorded on July 31, 1969, in New York and produced by Paul Leka; it first appeared on the Bear Family five-CD anthology of Gore's Mercury work entitled It's My Party (1994).[2][7]

Gore was one of the featured performers in the T.A.M.I. Show concert film, which was recorded and released in 1964 by American International Pictures, and placed in the National Film Registry in 2006. Gore had one of the longest sets in the film, performing six songs including "It's My Party", "You Don't Own Me", and "Judy's Turn to Cry".[11]

Gore performed on two consecutive episodes of the Batman television series (January 19 and 25, 1967), in which she guest-starred as Pussycat, one of Catwoman's minions.[2] In the January 19 episode "That Darn Catwoman", she lip-synched to the Bob Crewe-produced "California Nights", and in the January 25 episode "Scat! Darn Catwoman" she lip-synched to "Maybe Now".[9] "California Nights", which Gore recorded for her 1967 album of the same name, returned her to the upper reaches of the Hot 100.[7] The single peaked at No.16 in March 1967 (14 weeks on the chart). It was her first top 40 hit since "My Town, My Guy and Me" in late 1965 and her first top 20 since "Sunshine, Lollipops, and Rainbows".[2]

Gore also performed the single "We Know We're in Love" ten months earlier on the final episode of The Donna Reed Show, which aired on March 19, 1966.[7]

After high school, while continuing to make appearances as a singer, Gore attended Sarah Lawrence College, studying British and American English literature. At college folk music was popularly lauded as 'chic', whereas pop music was often derided as 'uncool.'[2] "Had I been tall with blonde hair, had I been Mary Travers, I would have gotten along fine."[12] She graduated in 1968.[13][14]

Gore composed songs for the soundtrack of the 1980 film Fame, for which she received an Academy Award nomination for "Out Here on My Own", written with her brother Michael.[15] Michael won the Academy Award for Best Original Song for the theme song of the same film. Gore played concerts and appeared on television throughout the 1980s and 1990s.[7]

Gore co-wrote a song, "My Secret Love", for the 1996 film Grace of My Heart. The film includes a subplot about a young singer named Kelly Porter, who is based in part on Gore and is played by Bridget Fonda. The character, who is a closeted lesbian, performs "My Secret Love" in the film.[16][17]

In 2005, Gore recorded Ever Since (her first album of new material since Love Me By Name in 1976), with producer/songwriter Blake Morgan, with the label Engine Company Records. The album received favorable reviews from The New York Times, Rolling Stone, Billboard Magazine and other national press.[7] The album also included a revised version of "You Don't Own Me", about which the New York Daily News wrote: "In Lesley Gore's new version of 'You Don't Own Me'—cut more than 40 years after its initial recording—she lends a pop classic new life."[18] Gore commented: "Without the loud backing track, I could wring more meaning from the lyric". And: "It's a song that takes on new meaning every time you sing it."[18]

Beginning in 2004, Gore hosted the PBS television series In the Life, which focused on LGBT issues.[19] In a 2005 interview with After Ellen, she stated she was a lesbian and had been in a relationship with luxury jewelry designer Lois Sasson since 1982.[19] She had known since she was 20 and stated that although the music business was "totally homophobic," she never felt she had to pretend she was straight. "I just kind of lived my life naturally and did what I wanted to do," she said. "I didn't avoid anything, I didn't put it in anybody's face."[2]

Gore had been working on a memoir and a Broadway show based on her life[20] when she died of lung cancer on February 16, 2015, at the NYU Langone Medical Center in Manhattan, New York City; she was 68 years old.[21][22] At the time of her death, Gore and her partner Lois Sasson had been together for 33 years.[23]

Her New York Times obituary stated that with her songs, all recorded before she was 18, such as "the indelibly defiant" 1964 hit “You Don’t Own Me,” Lesley Gore made herself "the voice of teenage girls aggrieved by fickle boyfriends, moving quickly from tearful self-pity to fierce self-assertion."[20]

This article uses material from the article Lesley Gore from the free encyclopedia Wikipedia and it is licensed under the GNU Free Documentation License.

Casbah Ehud Asherie
Update Required To play the media you will need to either update your browser to a recent version or update your Flash plugin.