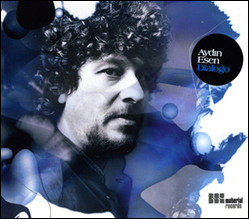 Aydn Esen (born 1962) is a Turkish jazz musician who plays keyboards and electronics.

Esen began music lessons at the age of 5 in Turkey. A talented pianist whose style combines his Turkish heritage with post bop jazz, Aydin Esen was exposed to music from the beginning of his life. His father was a trumpeter and Aydin began attending a music conservatory when he was five, continuing for 13 years. His background was in classical music although he also enjoyed playing drums. At the age of ten, he began sneaking out of school to play with other musicians and as a teenager he led several groups in a variety of styles. Esen first came to the United States when he was awarded a four-year scholarship to Berklee where he reportedly completed all of his classes within one year. After studying at the New England Conservatory of Music and Juilliard, he had opportunities to play with Gary Burton, Eddie Gomez, Pat Metheny and Emily Remler. Aydin Esen has thus far recorded for JMS (1988 and 1990), the Japanese Jazz City label (1989) and a lone effort for Columbia (1992) with a larger group. He has played with a wide variety of other musicians including Dave Liebman[1] and Wolfgang Muthspiel.[2]

This article uses material from the article Aydin Esen from the free encyclopedia Wikipedia and it is licensed under the GNU Free Documentation License.

Me and Mister Jones Sonja Kimmons & Pepe Lienhard Orch.
Update Required To play the media you will need to either update your browser to a recent version or update your Flash plugin.