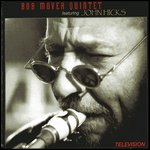 Bob (Robert) Mover (born March 22, 1952, Boston, Massachusetts) is an alto, tenor and soprano jazz saxophonist and a vocalist. His father was a musician who played professionally including stints with the Charlie Spivak orchestra. He started playing the alto saxophone at age 13, studied with Phil Woods at a summer music camp, and took private lessons with Ira Sullivan.

In 1973, at the age of 21, Mover was a sideman for Charles Mingus for a five-month period at New York Citys 5 Spot Café. By 1975 Mover was working regularly in New York City jazz clubs with Chet Baker and he made his first European appearances with Baker at La Grande Parade du Jazz in (Nice, France), Jazz Festival Laren (Holland), and the Middleheim Jazz Festival (Antwerp, Belgium).

In late 1975, Mover started leading his own groups around the New York area, and made his first two recordings as a leader in 1976 and 1977: On the Move (on the Choice label) and Bob Mover (Vanguard). Regular weekly gigs at the Sweet Basil in Greenwich Village featured prestigious sidemen such as Tom Harrell, Jimmy Garrison, Kenny Barron, Albert Dailey, Ben Riley, Mike Nock and Ron McLure.

Mover rejoined Chet Baker in 1981 for a European tour, playing in France, Belgium, the Netherlands, Austria and Cologne, Germany, where they made the recordings Chet Baker Live at Club Salt Peanuts Koln, Volumes 1 and 2 (Circle).

Mover recorded two more albums as a leader in 1981 and 1982, In the True Tradition and Things Unseen, both issued by Xanadu and both of which rated five stars in the All Music Guide to Recorded Jazz.

In 1983, Bob moved to Montreal and taught at Concordia University. Three years later, in 1986, he recorded his fifth album as leader, "The Nightbathers" with pianist Paul Bley and guitarist John Abercrombie, which was an experiment in free improvisation. From 1987 to 1997, Mover lived in Toronto and became a fixture of the Toronto jazz scene, also touring Europe with pianists Walter Davis Jr. and Tony Castillano. Together with Don Thompson and Archie Alleyne, Mover helped found the Toronto Jazz Quartet, a pianoless four-piece working band that played in and around the Toronto area including bars such as the Rex Hotel, Quigley's and the Pilot Tavern. He accepted a teaching position at York University, giving saxophone masterclasses and teaching a course he created called "Musicianship for Jazz Singers". During this period, in 1988 Walter Davis Jr. featured Bob on four tracks of his CD Illumination (Pony Canyon/Jazz City) with Ron Carter and Kenny Washington. The same year, Mover released another album as leader on the same label called You Go to My Head with Rufus Reid, Benny Green, Victor Lewis and Steve Hall.

His latest release is 'It Amazes Me' on Zoho music which includes sidemen Kenny Barron and Reg Schwager.

Mover has an explosive sound and style on the sax, directly influenced by Charlie Parker, Lee Konitz, Ira Sullivan, Stan Getz, and Sonny Rollins. His improvisations are melodically based, with lyrical melodies interspersed with complex bebop type lines. His selection of repertoire is wide and varied, with an encyclopedic knowledge of both standard and unconventional broadway and movie musical tunes.

This article uses material from the article Bob Mover from the free encyclopedia Wikipedia and it is licensed under the GNU Free Documentation License.