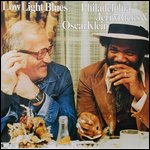 Oscar Klein (5 January 1930 in Graz, Austria 12 December 2006 in Baden-Württemberg) was an Austrian born jazz trumpeter who also played clarinet, harmonica, and swing guitar. His family fled the Nazis when he was young. He became known for "older jazz" like swing and Dixieland. In the early sixties he joined the famous Dutch Swing College Band in the Netherlands as first trumpeter and he is to be found on several of their recordings. He played with Lionel Hampton, Joe Zawinul, and others. In 1996 he was honored by then President Thomas Klestil.[1]

This article uses material from the article Oscar Klein from the free encyclopedia Wikipedia and it is licensed under the GNU Free Documentation License.

Theme for Ernie Joe Lovano Nonet
Update Required To play the media you will need to either update your browser to a recent version or update your Flash plugin.