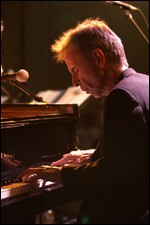 Bill Cunliffe (born June 26, 1956)[1] is an American jazz pianist and composer[2] based in Los Angeles[3][4] He has been described by The New York Times as being in the "modern jazz mainstream" and as an "accomplished pianist and composer."[3] Ernie Rideout of Keyboard Magazine described Cunliffe's playing as "inventive, melodic, and soulful.".[5]

He has written books on jazz for Alfred Publications, and teaches at California State University, Fullerton.

Cunliffe was born in Andover, Massachusetts. He explained in an interview with All About Jazz writer Fred Jung that he discovered music at an early age, with particular emphasis on classical music as well as jazz-oriented music from the 1960s and 1970s:

My mother was a good pianist ... I started just copying little things that I would hear my mom play and I would sit next to her and listen.[6]

Cunliffe described himself as having been drawn to "anything with hip harmony in it" with great melodies, and he loved listening to artists such as The Fifth Dimension, Burt Bacharach and Herb Alpert.[6] He attended Phillips Academy, and graduated in 1974 in the school's first coeducational class. In college, he performed rockandroll gigs at the Prince Spaghetti House in Saugus, Massachusetts. Cunliffe attended Wesleyan University for several years.[7][8] During this time, a friend named Michael Zaitchik introduced him to a jazz record of Oscar Peterson, and after listening to this record, Cunliffe became a "jazz player overnight", he recalled later.[9] While in school, he considered careers in medicine and psychology, but in his junior year, he decided finally that "music was it."[6]

After graduating from Duke University, where he studied with Mary Lou Williams, he received his masters degree from the Eastman School of Music

For two and a half years, Cunliffe taught music at Central State University in Wilberforce, Ohio. He then toured as pianist and arranger with the Buddy Rich Big Band, and worked with major recording artists including Frank Sinatra. He returned to Southern Ohio for a few years, where he was the "house pianist" at the Greenwich Tavern in Cincinnati, playing with Woody Shaw, Joe Henderson, Freddie Hubbard, Benny Golson and James Moody. In 1989 he moved to Los Angeles, and shortly after that won the 1989 Thelonious Monk Jazz Piano Competition, which was judged by pianists Hal Galper, Ahmad Jamal, and Barry Harris. Cunliffe worked occasionally with Buell Neidlinger's group "Thelonious," and in 1990 joined the Clayton Hamilton Jazz Orchestra, and the Clayton Brothers Quartet, recording a number of albums with them on the Qwest, Capri, and Fable labels. He also worked in duo with the jazz flutist Holly Hofmann, touring with her extensively, and recording on the Capri and Azica labels with her, notably, the session "Live at Birdland," with the great bassist Ray Brown. Cunliffe made three jazz albums for Warner/Discovery Records which achieved recognition in nationwide jazz polls,[9] including Bill in Brazil during a stint in Rio De Janeiro which was well received. He recorded several albums for Azica Records, including "Satisfaction," a solo piano outing, "Live at Rocco," with his sextet, and "Partners in Crime," a Hammond B3 session with guitarist Jim Hershman and drummer Jeff Hamilton In 2000, he recorded a sextet session of Earl Zindars music, and in 2001 Bill documented his working trio of ten years with Live at Bernies which was released on both CD and vinyl, highlighting his work with bassist Darek Oleszkiewicz and former Bill Evans drummer Joe LaBarbera. He has been a member of LaBarbera's quintet featuring saxophonist Bob Sheppard and trumpeter Clay Jenkins virtually since its formation in the early 90's, with a number of well-received albums on the Jazz Compass label.

Cunliffe has always loved Latin music, and in 2003 recorded his Latin octet, Imaginacion on Torii, which reached No. 2 in nationwide radio jazz charts. A follow-up album is waiting to be released. He is a Baldwin Pianos artist, and was Marian McPartland's guest on her famed Piano Jazz radio show in 1998.

Cunliffe led the Resonance Jazz Orchestra at the Playboy Jazz Festival in Hollywood, California in June 2011. He accompanied the great Rumanian pianist Marian Petrescu in selections from the "Resonance Jazz Orchestra Plays Tribute To Oscar Peterson" CD. This led to more engagements for Bill's big band, which recorded at Vitello's jazz club in LA in 2013 for a scheduled 2014 release. His big band compositions are published by Kendor Music, and Otter Music.

In the 1990s, Cunliffe wrote a number of educational publications. His book Jazz Keyboard Toolbox was published by Alfred Publications and became a standard reference in jazz.[9] Next came an educational DVD and book on beginning blues piano called "MAX Blues Keyboard," also for Alfred. He then published "Jazz Inventions for Keyboard;" short pieces in the style of the Chopin Preludes and Bach Inventions, with an accompanying audio CD. More recently, he published "Uniquely Familiar," a book of through-composed arrangements of jazz standards, followed by a similar collection entitled "Uniquely Christmas."

He has composed numerous works for big band, orchestra, chamber groups, and choir, and has been performed by many orchestras, including the Cincinnati Pops Orchestra, the Illinois Philharmonic, the Reading Symphony, the Rio Hondo Symphony Orchestra, the Manhattan School of Music Symphony, the Temple University and Cal State Fullerton Symphonies, and the Henry Mancini Institute Orchestra.[9] He has written extensively for television, and for film, including the Kareem Abdul-Jabbar produced film, "On the Shoulders of Giants," which was nominated for several awards by the NAACP.

His concerto for trumpet and orchestra entitled fourth stream... La Banda (2010) was nominated for a Grammy in that year, and was premiered by Terell Stafford and the Temple University Symphony Orchestra, conducted by Luis Biava, at Verizon Hall in Philadelphia, and at Alice Tully Hall in New York City. His three-movement piano concerto "Overture, Waltz and Rondo," for piano and chamber orchestra was inspired both by jazz and by the music of Wolfgang Amadeus Mozart; this piece was also nominated for a Grammy in 2012. Cunliffe composed a tuba concerto in 2011 for the great Los Angeles studio and orchestral tubist Jim Self. Bill conducted this piece with the Hollywood Ensemble at East/West Studios in Hollywood. He also recorded a piano and tuba version of the piece; the two versions are coupled on the Metre Records release. Temple University commissioned another concerto from him in late 2012; he took a chamber piece that he had written in 2004 based on Brazilian themes, and expanded it into a three movement saxophone concerto, which he recorded in Philadelphia in 2013 with Biava, the Temple orchestra, and the great saxophonist Dick Oatts. Cunliffe's Symphony #1, "Hearts Reaching Upward," dedicated to the late trumpet pedagogue Mark Garrabrant, was premiered in 2013 by trumpeter Kye Palmer, and the Cal State Fullerton Wind Ensemble, conducted by Mitchell J. Fennell.

He has conducted numerous workshops and clinics as well. Ongoing residencies include the Skidmore Jazz Institute, and the Vail Jazz Workshop. In 2010 he made a DVD teaching beginning jazz and blues piano.[6] He is composerinresidence at All Saints Episcopal Church, in Pasadena, California. He composes and performs with his trio, big band, and Latin jazz group Imaginacion.

Cunliffe won the 2010 Grammy Award for Best Instrumental Arrangement of Oscar Peterson's "West Side Story Medley".[10] In 2006 he was nominated for a Grammy award for his jazz arrangement of his song Do It Again.[11][12] He won several Down Beat Awards for his big band and orchestral pieces.[1] In 1989, Cunliffe won the Thelonious Monk International Jazz Piano Award. He received stipends from the National Endowment for the Arts.[1] He won a grant from the New Zealand School of Music[9] and the Rodger Fox Big Band of New Zealand released a CD of Bill's jazz orchestra compositions.[1] In 2005, he won the Philadelphia Jazz Composer competition sponsored by the American Composer Federation. In the 1990s, he was nominated for two Emmys for best original song on the television shows Another World and Guiding Light.

He has been described by fellow faculty members at California State University as "charming, witty, warm, and humble."[9] He will be married in December 2013 to Wanda Lau.

This article uses material from the article Bill Cunliffe from the free encyclopedia Wikipedia and it is licensed under the GNU Free Documentation License.

Typlogy Cedric Moos
Update Required To play the media you will need to either update your browser to a recent version or update your Flash plugin.