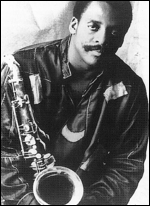 David Murray (born February 19, 1955) is an American jazz musician who plays tenor saxophone and bass clarinet mainly. He has recorded prolifically for many record labels since the mid-1970s.[1]

Murray was born in Oakland, California, USA. He was initially influenced by free jazz musicians such as Albert Ayler and Archie Shepp. He gradually evolved a more diverse style in his playing and compositions. Murray set himself apart from most tenor players of his generation by not taking John Coltrane as his model, choosing instead to incorporate elements of mainstream players Coleman Hawkins, Ben Webster and Paul Gonsalves into his mature style.[2] Despite this, he recorded a tribute to Coltrane, Octet Plays Trane, in 1999. He played a set with the Grateful Dead at a show on September 22, 1993, at Madison Square Garden in New York City. His 1996 tribute to the Grateful Dead, Dark Star, was also critically well received.[3]

He is currently living in Sines, Portugal, and participates yearly in its FMM Music festival.

This article uses material from the article David Murray (saxophonist) from the free encyclopedia Wikipedia and it is licensed under the GNU Free Documentation License.

Stompin' At The Savoy André Previn
Update Required To play the media you will need to either update your browser to a recent version or update your Flash plugin.