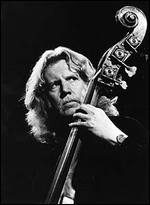 Eberhard Weber (born 22 January 1940 in Stuttgart) is a German double bassist and composer. As a bass player, he is known for his highly distinctive tone and phrasing.[1] Weber's compositions blend chamber jazz, European classical music, minimalism and ambient music, and are regarded as characteristic examples of the ECM Records sound.

Weber began recording in the early 1960s, and released The Colours of Chloë (ECM 1042), his first record under his own name, in 1973. In addition to his career as a musician, he also worked for many years as a television and theater director. He has designed an electric-acoustic bass with an additional string tuned to C.

Weber's music, often in a melancholic tone, frequently utilizes ostinatos, yet is highly organized in its colouring and attention to detail. He was an early proponent of the solid-body electric double bass, which he has played regularly since the early 1970s.

From the early 1960s to the early 1970s, Weber's closest musical association was with pianist Wolfgang Dauner. Their many mutual projects were diverse, from mainstream jazz to jazz-rock fusion to avant-garde sound experiments. During this period, Weber also played and recorded with pianists Hampton Hawes and Mal Waldron, guitarists Baden Powell de Aquino and Joe Pass, The Mike Gibbs Orchestra, violinist Stephane Grappelli, and many others.

Starting with The Colours of Chloë, Weber has released 13 more records under his own name, all on ECM. The ECM association also led to collaborations with other ECM recording artists such as Gary Burton (Ring, 1974; Passengers, 1976), Ralph Towner (Solstice, 1975; Solstice/Sound and Shadows, 1977), Pat Metheny (Watercolors, 1977), and Jan Garbarek (10 recordings between 1978 and 1998).

Since the early 1980s, Weber has regularly collaborated with the British singer-songwriter Kate Bush, playing on four of her last six studio albums (The Dreaming, 1982; Hounds of Love, 1985; The Sensual World, 1989; Aerial, 2005).

Since 1990, Weber's touring has been limited, and he has had only two new recordings under his own name: The 2001 release Endless Days is an elemental fusion of jazz and classical music flavors, fitting well the moniker chamber jazz. His main touring activity during that period was as a regular member of the Jan Garbarek Group. On the occasion of his birthday in March, 2008, he released Stages of a Long Journey, a live recording with the Stuttgart Radio Symphony Orchestra and featuring Gary Burton, Wolfgang Dauner and Jan Garbarek. In 2009 ECM also re-released his albums Yellow Fields, Silent Feet and Little Movements as a 3-CD collection titled "Colours".

In 2007, Weber suffered a stroke and was subsequently unable to perform.[2] In a January 2010 interview with Die Welt, he spoke about his medical condition and future projects.[3]

Weber was awarded the prestigious Albert Mangelsdorff-Preis in November 2009. A box set of his 1970s works was released by ECM Records the same month.

Weber's latest albums, Résumé (2012) and Encore (2015) comprise solos from his performances worldwide with The Jan Garbarek Group, overdubbed with keyboards/treatments by Weber, sax by Garbarek, and flügelhorn by Ack Van Rooyen.

See "External Links" below for a complete discography

Weber has, on at least five occasions, drawn on text from the book Watership Down (by Richard Adams) for the names of his compositions and albums. Examples include "Silent Feet" and "Eyes That Can See in the Dark" from the Silent Feet album; "Often in the Open" from the Later That Evening album; and "Quiet Departures" and the title track on the Fluid Rustle album.

This article uses material from the article Eberhard Weber from the free encyclopedia Wikipedia and it is licensed under the GNU Free Documentation License.

El Salon de Gutbucket Engelbert Wrobel's Swing Society
Update Required To play the media you will need to either update your browser to a recent version or update your Flash plugin.