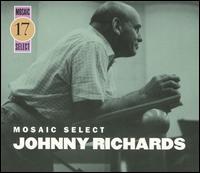 Johnny Richards (born Juan Manuel Cascales, November 2, 1911 – October 7, 1968) was a jazz arranger and composer. He was a pivotal arranger for some of the more adventurous performances by Stan Kenton's big band in the 1950s and early 1960, such as Cuban Fire! and Kenton's West Side Story.

Richards was born in Toluca, Mexico to a Spanish father (Juan Cascales y Valero) and a Mexican mother (Maria Celia Arrue AKA Marie Cascales), whose parents were Spanish immigrants to Mexico. He entered the United States on August 4, 1919 at Laredo, Texas, along with his mother, three brothers (also professional musicians) and sister:

Richards worked in Los Angeles, California from the late 1930s to 1952. In 1952 he moved to New York City. He had been arranging for Stan Kenton since 1950 and continued to do so through the mid-1960s. He also led his own bands throughout his career. In addition, he wrote the music for the popular song Young at Heart (1953), made famous by Frank Sinatra and others.

Richards died October 7, 1968, in New York, New York, of a brain tumor.[6] Reviewers have deemed his style as being influenced by Duke Ellington and Pete Rugolo.[7]

This article uses material from the article Johnny Richards from the free encyclopedia Wikipedia and it is licensed under the GNU Free Documentation License.

Three To Get Ready Dave Brubeck Quartet
Update Required To play the media you will need to either update your browser to a recent version or update your Flash plugin.