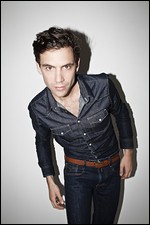 After recording his first extended play, Dodgy Holiday, Mika released his first full-length studio album, Life in Cartoon Motion, on Island Records in 2007. Life in Cartoon Motion sold more than 5.6 million copies worldwide and helped Mika win a Brit Awardwinning Best British Breakthrough act, and receive a Grammy Award nomination.[4][5] In 2006, Mika started up his company, Dodgy Holiday Tours Limited.[6] Two years later Mika released his second extended play, Songs for Sorrow, of which limited edition copies are now sold out worldwide. In 2009 Mika released his second studio album, The Boy Who Knew Too Much. Finishing his worldwide tour, Mika recorded his third album, The Origin of Love, stating it would be "more simplistic pop, less layered than the last one".[7] The album was released internationally on 16 September 2012 and in the UK on 8 October 2012.[8]

Mika was born in Beirut, the third of five children born to a Syrian Lebanese mother and an American father.[9] When he was a year old his family was forced to leave war-torn Lebanon and moved to Paris.[9][10] The first piano piece he learned to play was "Les Champs-Élysées", by Joe Dassin.[9] At age seven, he wrote his first song, which he describes as an "awful" piano instrumental called "Angry".[2] The family moved to London when he was nine years old. There, he attended the Lycée Français Charles de Gaulle, where he experienced severe bullying. He also had problems with dyslexia. In response to these experiences Mika was home-schooled by his mother at the age of 12, for six to eight months.[2] He then attended St Philip's School in Kensington, where he was the head of the Schola Cantorum (the St. Philip's Choir). Later he attended Westminster School and the Royal College of Music, which he left to record his first album at Casablanca Records.[11] He has also slightly altered his given name, Mica, changing the "c" to a "k" because he was frustrated by how often people would mispronounce it.[12]

Mika comes from a family of seven (Mika was one of five siblings). He has one younger brother and one younger sister along with two older sisters. His sister Yasmine, who works as an artist under the nom de plume DaWack, painted the cartoon art for his two albums Life in Cartoon Motion and The Boy Who Knew Too Much, and she is currently a fashion designer. Mika speaks French[9] and Spanish fluently; in an interview on 28 September 2009 with The Chris Moyles Show on BBC Radio 1 he commented that he had taken Mandarin Chinese for 9 years but did not speak it very well; he also mentioned that his three sisters did all speak it fluently. He also speaks a little bit of Arabic with a Lebanese dialect, his mother's native tongue.[13]

As a child Mika was trained by Alla Ardakov (Ablaberdyeva), a Russian opera professional, and later attended the Royal College of Music in London. His debut radio appearance was on Dermot O'Leary's BBC Radio 2 show in September 2006. He also appeared on Later... with Jools Holland, and on The Friday Night Project on 19 January 2007.[14] Mika is rumoured to have a vocal range of five octaves,[11] but claims that it is actually closer to three and a half octaves.[15]

Mika denied allegations that he is steering clear of sexual taboos in order to appeal to the US market, pointing to the song "Billy Brown", which is about a married man who has an affair with another man. He is quoted as saying, "If I was worried about sexual taboos I certainly wouldn't have made the record I made. It has nothing to do with that. It has more to do with self-respect."[16] In an interview in the US gay magazine Out he stated that "there is a way of discussing sexuality without using labels."[17]

In a September 2009 interview in Gay & Night Mika commented on his sexuality: "I've never ever labelled myself. But having said that; I've never limited my life, I've never limited who I sleep with... Call me whatever you want. Call me bisexual, if you need a term for me..."[18] Later he stated in an interview with This Is London "I consider myself label-less because I could fall in love with anybody - literally - any type, any body. I'm not picky."[19]

In March 2010, Mika was named in France a Knight of the Order of Arts and Letters for services to music.[20]

In an August 2012 interview with the magazine Instinct, the singer confirmed that he was gay.[21][22]

Mika's first single was a limited 7"/download release called "Relax, Take It Easy" (2006). It was play listed by BBC Radio 1 in the United Kingdom, and made Record of the Week by DJ Scott Mills. The Dodgy Holiday EP also became available for download. The song "Billy Brown" was available for free download for a week from the iTunes Store. A song titled 'Overrated', which was recorded in 2004, was "unofficially" released online.

Mika's début album Life in Cartoon Motion was released on 5 February 2007, and has brought comparison with artists such as Freddie Mercury,[24][25] Scissor Sisters,[26] Elton John,[27] Prince,[28] Robbie Williams[29] and David Bowie.[29] "Grace Kelly," in fact, references Mercury in the lyrics: "I try to be like Grace Kelly/But all her looks were too sad/So I try a little Freddie/I've gone identity mad."

Mika toured the United States in June 2007, with support from Sara Bareilles and Natalia Lesz.

His debut album Life in Cartoon Motion has a coming of age theme and deals with his transition from childhood to the present, though he has stated that not all of the songs are autobiographical. His songs often deal with difficult topics. For instance, in "Big Girl (You Are Beautiful)" the theme of larger women suffering from discrimination is explored. Mika has said that the fact that his mother was a big woman, and that he had seen the prejudices against her, helped him to write the song.[32] In another example of dealing with more difficult subject matter, in the song "Billy Brown", Mika writes about a married man who has a homosexual affair.

On 20 February 2008, Mika opened the 2008 BRIT Awards with a live performance of "Love Today," "Grace Kelly," and a duet, "Standing in the Way of Control", with Beth Ditto. He was later awarded the BRIT Award for Best British Breakthrough Artist.

Mika has reportedly written songs for other musicians, saying "I write songs for other people under different names most of the time. I have a little family of three names. One of them has been discovered it's Alice."[33]

Main article: The Boy Who Knew Too Much (album)

Prior to the release of his second studio album, Mika released a limited-edition extended play titled Songs for Sorrow on 8 June 2009.[34] The EP includes 4 tracks and a 68-page book featuring lyrics and exclusive illustrated interpretations of each song by some of Mikas favourite artists.[34] The song "Blue Eyes" was used to promote the EP, and was A-listed on the BBC Radio 2 playlist.[35]

Mika's second studio album The Boy Who Knew Too Much was released on 21 September 2009.[36] Mika recorded the majority of the album in Los Angeles with producer and musician Greg Wells, who also produced his debut album Life In Cartoon Motion.[37] The album has been described as Mika dealing with his adolescent teenage years and "in a sense is kind of part two" of his first album.[38]

The album was originally titled We Are Golden after the first single from the album, "We Are Golden". On 20 July 2009 in an on-air interview with DJ Jo Whiley on BBC Radio 1, Mika revealed he was considering renaming the album, because he wanted "something a little more ridiculous."[39] On 6 August 2009 it was confirmed that the album's title would change to The Boy Who Knew Too Much.[40]

The first single from the album, "We Are Golden", made its radio debut in the United Kingdom on 20 July 2009, on BBC Radio 2[41] and was released for download on 6 September 2009, with the physical release following on 7 September 2009.[36] The single debuted at number 4 on the UK Singles Chart on 13 September 2009. Mika's promotional tour of the single included live performances at the iTunes Festival 2009 at The Roundhouse in Camden, London and on Friday Night with Jonathan Ross in September 2009. It was reported that Mika spent £25,000 on drinks after inviting fans to join him at his local pub via Twitter on 7 September 2009 to celebrate the release of his single.[42][43]

In November 2009 Mika performed 'Rain' and 'We Are Golden' live at the Sydney Opera House for the Australian Idol Grand Final. He also performed on Sunrise on the Seven Network in Australia. On 30 November 2009, Mika performed "Let It Snow" in a duet with Japanese pop star Hikaru Utada.[46] On 21 March 2010 Mika performed "Gave It All Away" with Boyzone on ITV1 for Boyzone: A Tribute To Stephen Gately.

Mika has begun recording his new album. He has stated in numerous interviews that the new album will be more simplistic and less layered than the previous album.[7] Mika announced the title of the album, The Origin of Love in a French interview on 17 June.[49] Mika has also said that he will include a number of French tracks on the album, and that the musical style will include elements of Daft Punk and Fleetwood Mac.[50] He describes the album as less childlike and more serious. The first single released from the album is "Elle me dit", Mika's first French track. It was released online on 1 July 2011. Nick Littlemore of Empire of The Sun, Paul Steel, frYars, William Orbit, Doriand, Priscilla Renea, Billboard, Hillary Lindsey, Ellie Goulding, Pharrell Williams, Benny Benassi, Martin Solveig, Klas Åhlund, Wayne Hector, and Greg Wells are all confirmed to be involved with the production of the album.[51] On 8 June 2012, the video for "Make You Happy" was released on Vimeo.[52] The song served as a buzz single for the album.[53] On 14 June 2012, "Celebrate", which features Pharrell Williams, was announced as the album's lead single.[54][55] The album was released internationally on 17 September 2012 and in the UK on 8 October 2012.[8]

On 6 March 2013 Mika announced a new tour and after taking some time off, had been writing his fourth album as well as songs for other artists over the previous few weeks. Mika also hinted that new material may be released towards the end of 2013.[56] On 23 April 2013 Mika was revealed to be a new judge on the seventh season of the X Factor Italy. He will be the first international mentor on the Italian edition of the show.[57] On 23 October, it was announced that Mika will be releasing a compilation album in Italy titled 'Songbook Vol. 1' including music from his three previous albums, plus new re-worked tracks.[58] On 17 January 2014, Mika took part in the Italian television show Le invasioni barbariche on La7, and with the Nobel Prize in Literature Dario Fo, performing a duet on the song "Ho visto un Re", written by the same Fo and already played by Enzo Jannacci.[59]

He has joined The Voice: la plus belle voix, replacing Louis Bertignac, on the 3rd season.

This article uses material from the article Mika (singer) from the free encyclopedia Wikipedia and it is licensed under the GNU Free Documentation License.