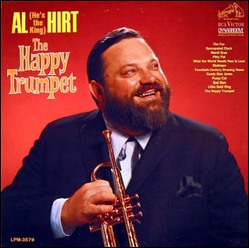 Al Hirt (November 7, 1922 April 27, 1999) was an American trumpeter and bandleader.[1] He is best remembered for his million-selling recordings of "Java" and the accompanying album Honey in the Horn (1963), and for the theme song to The Green Hornet. His nicknames included "Jumbo" and "The Round Mound of Sound".[1] Hirt was inducted into The Louisiana Music Hall of Fame in November 2009.

Alois Maxwell Hirt was born in New Orleans, Louisiana,[1] the son of a police officer. At the age of six, he was given his first trumpet, which had been purchased at a local pawnshop. He would play in the Junior Police Band with the children of Alcide Nunez, and by the age of 16, Hirt was playing professionally, often with his friend Pete Fountain. During this time, he was hired to play at the local horse racing track, beginning a six-decade connection to the sport.

In 1940, Hirt went to Cincinnati, Ohio, to study at the Cincinnati Conservatory of Music with Dr. Frank Simon (a former soloist with the John Philip Sousa Orchestra). After a stint as a bugler in the United States Army during World War II, Hirt performed with various Swing big bands, including those of Tommy Dorsey, Jimmy Dorsey, Benny Goodman, and Ina Ray Hutton.

Hirt then returned to New Orleans, working with various Dixieland groups and leading his own bands. Despite Hirt's statement years later "I'm not a jazz trumpeter and never was a jazz trumpeter", he made a few recordings where he demonstrated his ability to play in that style, during the 1950s with bandleader Monk Hazel, and a few other recordings on the local Southland Records label.

Hirt's virtuoso dexterity and fine tone on his instrument soon attracted the attention of national labels and he signed with RCA Victor Records. Hirt posted twenty-two albums on the Billboard charts in the 1950s and 1960s. The albums Honey In The Horn and Cotton Candy were both in the Top 10 best sellers for 1964, the same year Hirt scored a hit single with his cover of Allen Toussaint's tune "Java" (Billboard No. 4), and later won a Grammy Award for the same recording. Both Honey in the Horn and "Java" sold over one million copies, and were awarded gold discs.[2]

Hirt's Top 40 charted hit "Sugar Lips" in 1964 would be later used as the theme song for the NBC daytime game show Eye Guess, hosted by Bill Cullen and originally airing during the mid-to-late 1960s. Hirt was chosen to record the frenetic theme for the 1960s TV show "The Green Hornet", by famed arranger and composer Billy May. Thematically reminiscent of Nikolai Rimsky-Korsakov's Flight of the Bumblebee, it showcased Hirt's technical prowess. The recording again gained public attention in 2003 when it was used in the film Kill Bill.

From the mid-1950s to early 1960s, Hirt and his band played nightly at Dan's Pier 600 at the corner of St. Louis and Bourbon Street. The club was owned by his business manager, Dan Levy, Sr. In 1962 Hirt opened his own club on Bourbon Street in the French Quarter, which he ran until 1983. He also became a minority owner in the NFL expansion New Orleans Saints in 1967.

In 1962, in an effort to showcase him in a different musical setting, Hirt was teamed with arranger and composer Billy May and producer Steve Sholes to record an album titled Horn A Plenty that was a departure from the Dixieland material that he was generally associated with. Covering an eclectic variety of popular, standard and show tunes, it featured a big-band supplemented by timpani, French horns and harp.

On February 8, 1970, while performing in a Mardi Gras parade in New Orleans, Hirt was injured while riding on a float. It is popularly believed that he was struck in the mouth by a thrown piece of concrete or brick. Factual documentation of the details of the incident is sparse, consisting primarily of claims made by Hirt after the incident. Whatever the actual cause of his injuries, Hirt underwent surgery and had to wait a while and then practice slowly to make a return to the club scene. This incident was parodied in a Saturday Night Live skit from their second season Mardi Gras special, the "Let's Hit Al Hirt in the Mouth with a Brick Contest".[3]

In 1999, Hirt died, aged 76, in New Orleans of liver failure,[1] after spending the previous year in a wheelchair due to edema in his leg. Despite the bout with edema, Hirt continued to play in local clubs including Chris Owens Club. Hirt was buried in Metairie Cemetery in New Orleans.

Hirt had eight children, ten grandchildren, and six great-grandchildren. In 1990, he married Beverly Estabrook Essel, a friend of 40 years.

He is referred to in the 1987 film, Good Morning Vietnam, in a broadcast made by Lieutenant Hauk (Bruno Kirby).

This article uses material from the article Al Hirt from the free encyclopedia Wikipedia and it is licensed under the GNU Free Documentation License.

Put It Where You Want It Rocksack
Update Required To play the media you will need to either update your browser to a recent version or update your Flash plugin.