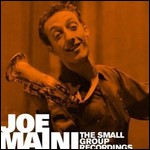 Maini died at age 34 in Los Angeles. Historians and reference works usually state that Maini died playing Russian roulette,[1][2] though his family and several witnesses contend that the death was the result of a firearms accident.[3]

Forty-four years after Maini's death, Lone Hill Jazz issued a four-CD set with many of his small group recordings.[4]

This article uses material from the article Joe Maini from the free encyclopedia Wikipedia and it is licensed under the GNU Free Documentation License.

Beautiful Love Anny Weiler
Update Required To play the media you will need to either update your browser to a recent version or update your Flash plugin.