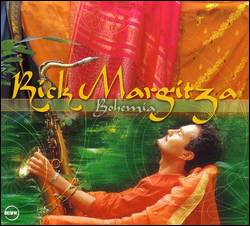 Margitza's paternal grandfather, a Hungarian Gypsy violinist, taught him to play the violin at the age of four. His father also played violin with the Detroit Symphony Orchestra. Following this he played piano and oboe, and settled on tenor sax while in Fordson High School. He attended several colleges: Wayne State University, Berklee College of Music, University of Miami, and Loyola University New Orleans. He toured with Maynard Ferguson and Flora Purim in the 1980s, and moved to New York City in 1988, where he played with Miles Davis.[1]

Between 1989 and 1991, Margitza released three sessions for Blue Note Records, and has recorded copiously thereafter, including with Eddie Gómez, Tony Williams, Bobby Hutcherson, Maria Schneider, McCoy Tyner, and Chick Corea. He has also composed a saxophone concerto and two symphonies for orchestra.

This article uses material from the article Rick Margitza from the free encyclopedia Wikipedia and it is licensed under the GNU Free Documentation License.

St. Tropez Ray Brown & Oscar Peterson
Update Required To play the media you will need to either update your browser to a recent version or update your Flash plugin.