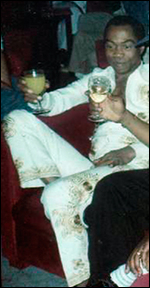 Fela Anikulapo Kuti (15 October 1938 2 August 1997), or simply Fela, was a Nigerian multi-instrumentalist musician and composer, pioneer of afrobeat music, human rights activist, and political maverick.[1] James Brown cited him as one of the originators of funk.

Fela was born Olufela Olusegun Oludotun Ransome-Kuti in Abeokuta, Ogun State, Nigeria,[2] to a middle-class family. His mother, Funmilayo Ransome-Kuti was a feminist activist in the anti-colonial movement and his father, Reverend Israel Oludotun Ransome-Kuti, a Protestant minister and school principal, was the first president of the Nigerian Union of Teachers. His brothers, Dr. Beko Ransome-Kuti and Olikoye Ransome-Kuti both medical doctors, are well known in Nigeria.

Fela was sent to London in 1958 to study medicine but decided to study music instead at the Trinity College of Music. While there he formed the band Koola Lobitos, playing a style of music that he would later call afrobeat. The style was a fusion of African jazz and funk with West African highlife. In 1960, Fela married his first wife, Remilekun (Remi) Taylor, with whom he would have three children (Femi, Yeni, and Sola). In 1963, Fela moved back to Nigeria, re-formed Koola Lobitos and trained as a radio producer for the Nigerian Broadcasting Corporation. He played for some time with Dr. Victor Olaiya and his All Stars.[3] In 1969, Fela took the band to the United States. While there, Fela discovered the Black Power movement through Sandra Smith (now Izsadore)a partisan of the Black Panther Partywhich would heavily influence his music and political views and renamed the band Nigeria 70. Soon, the Immigration and Naturalization Service was tipped off by a promoter that Fela and his band were in the US without work permits. The band then performed a quick recording session in Los Angeles that would later be released as The 69 Los Angeles Sessions.

Fela and his band, renamed Africa '70', returned to Nigeria. He then formed the Kalakuta Republic, a commune, a recording studio, and a home for many connected to the band that he later declared independent from the Nigerian state. Fela set up a nightclub in the Empire Hotel, named the Afro-Spot and then the Afrika Shrine, where he performed regularly. Fela also changed his middle name to Anikulapo (meaning "he who carries death in his pouch"),[4] stating that his original middle name of Ransome was a slave name. The recordings continued, and the music became more politically motivated. Fela's music became very popular among the Nigerian public and Africans in general. In fact, he made the decision to sing in Pidgin English so that his music could be enjoyed by individuals all over Africa, where the local languages spoken are very diverse and numerous. As popular as Fela's music had become in Nigeria and elsewhere, it was also very unpopular with the ruling government, and raids on the Kalakuta Republic were frequent. During 1972 Ginger Baker recorded Stratavarious with Fela appearing alongside Bobby Gass.[5]

In 1977 Fela and the Afrika 70 released the hit album Zombie, a scathing attack on Nigerian soldiers using the zombie metaphor to describe the methods of the Nigerian military. The album was a smash hit with the people and infuriated the government, setting off a vicious attack against the Kalakuta Republic, during which one thousand soldiers attacked the commune. Fela was severely beaten, and his elderly mother was thrown from a window, causing fatal injuries. The Kalakuta Republic was burned, and Fela's studio, instruments, and master tapes were destroyed. Fela claimed that he would have been killed if it were not for the intervention of a commanding officer as he was being beaten. Fela's response to the attack was to deliver his mother's coffin to the main army barrack in Lagos and write two songs, "Coffin for Head of State" and "Unknown Soldier," referencing the official inquiry that claimed the commune had been destroyed by an unknown soldier.

Fela and his band then took residence in Crossroads Hotel as the Shrine had been destroyed along with his commune. In 1978 Fela married 27 women, many of whom were his dancers, composers, and singers to mark the anniversary of the attack on the Kalakuta Republic. Later, he was to adopt a rotation system of keeping only twelve simultaneous wives.[6] The year was also marked by two notorious concerts, the first in Accra in which riots broke out during the song "Zombie," which led to Fela being banned from entering Ghana. The second was at the Berlin Jazz Festival after which most of Fela's musicians deserted him, due to rumours that Fela was planning to use the entirety of the proceeds to fund his presidential campaign.

Despite the massive setbacks, Fela was determined to come back. He formed his own political party, which he called Movement of the People. In 1979 he put himself forward for President in Nigeria's first elections for more than a decade but his candidature was refused. At this time, Fela created a new band called Egypt 80 and continued to record albums and tour the country. He further infuriated the political establishment by dropping the names of ITT vice-president Moshood Abiola and then General Olusegun Obasanjo at the end of a hot-selling 25-minute political screed titled "I.T.T. (International Thief-Thief)."

In 1984, he was again attacked by the military government, who jailed him on a dubious charge of currency smuggling. His case was taken up by several human-rights groups, and after 20 months, he was released from prison by General Ibrahim Babangida. On his release he divorced his 12 remaining wives, saying that "marriage brings jealousy and selfishness."[6] Once again, Fela continued to release albums with Egypt 80, made a number of successful tours of the United States and Europe and also continued to be politically active. In 1986, Fela performed in Giants Stadium in New Jersey as part of the Amnesty International Conspiracy of Hope concert, sharing the bill with Bono, Carlos Santana, and the Neville Brothers. In 1989, Fela & Egypt 80 released the anti-apartheid "Beasts of No Nation" album that depicts on its cover U.S. President Ronald Reagan, UK Prime Minister Margaret Thatcher and South African Prime Minister P.W. Botha with fangs dripping blood.

His album output slowed in the 1990s, and eventually he stopped releasing albums altogether. In 1993 he and four members of the Afrika 70 Organisation were arrested for murder. The battle against military corruption in Nigeria was taking its toll, especially during the rise of dictator Sani Abacha. Rumours were also spreading that he was suffering from an illness for which he was refusing treatment. On 3 August 1997, Olikoye Ransome-Kuti, already a prominent AIDS activist and former Minister of Health, stunned the nation by announcing his younger brother's death a day earlier from Kaposi's sarcoma brought on by AIDS. (Their younger brother Beko was in jail at this time at the hand of Abacha for political activity). More than a million people attended Fela's funeral at the site of the old Shrine compound. A new Africa Shrine has opened since Fela's death in a different section of Lagos under the supervision of his son Femi Kuti.

The musical style performed by Fela Kuti is called Afrobeat, which is a fusion of jazz, funk, psychedelic rock, and traditional West African chants and rhythms. As Iwedi Ojinmah points out in his Article "Baba is Dead - Long Live Baba," Afrobeat also borrows heavily from the native "tinker pan" African-style percussion that Kuti acquired while studying in Ghana with Hugh Masakela, under the uncanny Hedzoleh Soundz. Afrobeat is also characterized by having vocals, and musical structure, along with jazzy, funky horn sections. The endless groove is also used, in which a base rhythm of drums, shekere, muted guitar, and bass guitar are repeated throughout the song. His band was notable for featuring two baritone saxophones, whereas most groups using this instrument only use one. This is a common technique in African and African-influenced musical styles, and can be seen in funk and hip-hop. Some elements often present in Fela's music are the call-and-response within the chorus and figurative but simple lyrics. Fela's songs were almost always over 10 minutes in length, some reaching the 20- or even 30-minute marks, while some unreleased tracks would last up to 45 minutes when performed live. This was one of many reasons that his music never reached a substantial degree of popularity outside Africa. His songs were mostly sung in Nigerian pidgin, although he also performed a few songs in the Yoruba language. Fela's main instruments were the saxophone and the keyboards, but he also played the trumpet, guitar, and took the occasional drum solo. Fela refused to perform songs again after he had already recorded them, which also hindered his popularity outside Africa. Fela was known for his showmanship, and his concerts were often quite outlandish and wild. He referred to his stage act as the Underground Spiritual Game. Fela attempted making a movie but lost all the materials to the fire that was set to his house by the military government in power.

The American Black Power movement influenced Fela's political views. He was also a supporter of Pan-Africanism and socialism, and called for a united, democratic African republic. He was a candid supporter of human rights, and many of his songs are direct attacks against dictatorships, specifically the militaristic governments of Nigeria in the 1970s and 1980s. He was also a social commentator, and he criticized his fellow Africans (especially the upper class) for betraying traditional African culture. The African culture he believed in also included having many wives (polygyny) and the Kalakuta Republic was formed in part as a polygamist colony. He defended his stance on polygyny with the words "A man goes for many women in the first place. Like in Europe, when a man is married, when the wife is sleeping, he goes out and fucks around. He should bring the women in the house, man, to live with him, and stop running around the streets!"[7] His views towards women are characterised by some as misogynist, with songs like "Mattress" typically cited as evidence[8] In a more complex example, he mocks the aspiration of African women to European standards of ladyhood while extolling the values of the market woman in his song "Lady." It should be noted, though, that Fela was very open when it came to sex, as he portrayed in some of his songs, such as "Open and Close" and "Na Poi."

Bypassing editorial censorship in Nigeria's predominantly state controlled press, Kuti began in the 1970s buying advertising space in daily and weekly newspapers such as The Daily Times and The Punch in order to run outspoken political columns.[9] Published throughout the 1970s and early 1980s under the title Chief Priest Say, these columns were essentially extensions of Kuti's famous Yabi Sessionsconsciousness-raising word-sound rituals, with himself as chief priest, conducted at his Lagos nightclub. Organized around a militantly Afrocentric rendering of history and the essence of black beauty, Chief Priest Say focused on the role of cultural hegemony in the continuing subjugation of Africans. Kuti addressed a number of topics, from explosive denunciations of the Nigerian Government's criminal behavior; Islam and Christianity's exploitive nature, and evil multinationals; to deconstructions of Western medicine, Black Muslims, sex, pollution, and poverty. Chief Priest Say was cancelled, first by Daily Times then by Punch, ostensibly due to non-payment, but many commentators have speculated that the paper's respective editors were placed under increasingly violent pressure to stop publication.

Fela was an outspoken critic of organized religion, including a scathing attack on both Christianity and Islam as corrupt and antithetical to traditional African spirituality, in a number of his songs.

This article uses material from the article Fela Kuti from the free encyclopedia Wikipedia and it is licensed under the GNU Free Documentation License.

Weep No More Carmen McRae & Dave Brubeck
Update Required To play the media you will need to either update your browser to a recent version or update your Flash plugin.