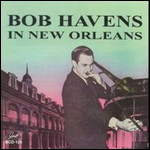 Born to a musical family in Quincy, Illinois, he began studying violin and trombone at age seven and played both instruments throughout his school years. He landed his first professional job with a local dance band at age 12. By the age of 16, his talent as a trombonist was recognized with a scholarship from the Interlochen Music Camp in Michigan and Bob held the first trombone chair in the school's 250 piece concert band. He later held the first trombone chair in the Quincy Symphony while also playing in many popular dance groups in Illinois.

After serving in the Illinois National Guard as a bandsman during the Korean War, he left Quincy in 1955 to tour with the Ralph Flanagan Orchestra. In 1956, he joined George Girard's Dixieland Band at the Famous Door in New Orleans. There, he met his idol, Jack Teagarden.

In 1957, Bob joined Al Hirt at Dan's Pier 600 on Bourbon Street when Hirt formed his very first band. The front line consisted of Hirt, Havens and Pete Fountain. During the time in New Orleans, he recorded albums for Good Times Jazz and Vic labels with the Girard band, and on Verve and Audio Fidelity[2] with Hirt. He also recorded about a dozen albums for the Southland label with many other New Orleans musicians.

Bob stayed with this group until 1960 when he was persuaded to move to the West Coast and join the Lawrence Welk Orchestra as a featured soloist on their weekly TV series. His tenure with this show lasted for 23 years until the show ended in 1982.

Following that, he continued as a freelance professional, working often with the Bob Crosby Bob Cats and the Benny Goodman Orchestra (led by clarinetist Peanuts Hucko). From 1985 to 1995, Havens played with the Great Pacific Jazz Band along with Bob Ringwald (lead vocals/piano), Don Nelson (saxophone), and Zeke Zarchy (trumpet).

In 2005, he performed with the North Carolina Pops Orchestra at Campbell University with fellow Welk star Ava Barber in a benefit concert raising money for victims of Hurricane Katrina.

Bob Havens lives in Quincy, Illinois. He continues to record and appear at jazz festivals and concerts throughout the world.

This article uses material from the article Bob Havens from the free encyclopedia Wikipedia and it is licensed under the GNU Free Documentation License.

Gee Baby, Ain't I Good To You George Shearing
Update Required To play the media you will need to either update your browser to a recent version or update your Flash plugin.