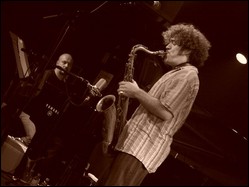 Julien Lourau (born 1970) is a French jazz saxophonist. He is the son of sociologist René Lourau.

In 1992, Julien Lourau won the first soloist prize in La Défense and went on to set up his Groove Gang.[1]

In 1999, he experimented with electronic music for his album Gambit which attracted a following from young French people and led to a number of successful concerts. He won that year's jazz trophy at the "Victoires de la Musique" awards.[2] He returned to a more traditional jazz in 2002 with the album The rise, regarded as his most mature album.[3] 2007 saw the release of Julien Lourau vs Rumbabierta which combines Lourau's avant-garde jazz with Afro-Cuban sounds.

This article uses material from the article Julien Lourau from the free encyclopedia Wikipedia and it is licensed under the GNU Free Documentation License.

Slowly Goin' Out Of Your Mind Blue Flagships
Update Required To play the media you will need to either update your browser to a recent version or update your Flash plugin.