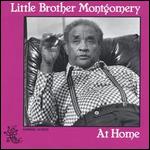 Largely self-taught, Montgomery is often thought of as just a blues pianist, but he was an important blues pianist with an original style. He was also quite versatile, however, and worked in jazz bands including larger ensembles that used written arrangements. Although he did not read music, he learned band routines by ear, once through an arrangement and he had it memorized.

Montgomery was born in the town of Kentwood, Louisiana, a sawmill town near the Mississippi Border, across Lake Pontchartrain from the city of New Orleans, where he spent much of his childhood. As a child he looked like his father, Harper Montgomery, and was called Little Brother Harper. The name evolved into Little Brother Montgomery, a nickname which stuck. He started playing piano at the age of 4, and by age 11 he was playing at various barrelhouses in Louisiana. His own musical influences were Jelly Roll Morton who used visit the Montgomery household.

Early on he played at African American lumber and turpentine camps in Louisiana and Mississippi, then with the bands of Clarence Desdunes and Buddy Petit. He first went to Chicago from 1928 to 1931, where he made his first recordings. From 1931 through 1938 he led a band in Jackson.

In 1942 Montgomery moved back to Chicago, which would be his base for the rest of his life, with various tours to other United States cities and Europe.[1] In the late 1950s he was "discovered" by wider white audiences. He toured briefly with Otis Rush in 1956.[3] His fame grew in the 1960s, and he continued to make many recordings, including on his own record label, FM Records (formed in 1969).[1] FM came from Floberg, his wife Jan's maiden name and Montgomery, his own surname.

Montgomery toured Europe several times in the 1960s, and recorded some of his albums there.[4] Montgomery appeared at many blues and folk festivals during the following decade and was considered a living legend, a link to the early days of blues and New Orleans.[3]

Among his original compositions are "Shreveport Farewell", "Farrish Street Jive", and "Vicksburg Blues". His instrumental "Crescent City Blues" served as the basis for a song of the same name by Gordon Jenkins, which in turn was adapted by Johnny Cash as "Folsom Prison Blues."[5]

In 1968, Montgomery contributed to two albums by Spanky and Our Gang; Like to Get to Know You and Anything You Choose b/w Without Rhyme Or Reason.

Montgomery died on September 6, 1985, in Champaign, Illinois, and is interred in the Oak Woods Cemetery.

In 2013, Montgomery was posthumously inducted to the Blues Hall of Fame.[6]

Paul Gayten is his nephew.

This article uses material from the article Little Brother Montgomery from the free encyclopedia Wikipedia and it is licensed under the GNU Free Documentation License.