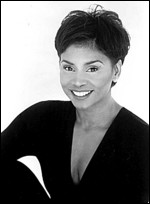 Niki Haris (born April 17, 1962) is an American actress, dancer, and singer of pop, R&B, dance music and jazz, perhaps best known for having been one of Madonna's backing vocalists from 1987 to 2001.

Haris was born Gina Nichole Haire in Benton Harbor, Michigan on April 17, 1962, the daughter of Grammy Award nominated jazz artist Gene Harris.[1] She attended college in Southern California before pursuing a singing career in amusement parks and clubs in the California area.

Haris was a friend and backing vocalist for Madonna and began working with Madonna in her Who's That Girl Tour. She appeared in the movie Truth or Dare, a documentary of backstage and onstage footage recorded during the Blond Ambition Tour. She also acted in the Madonna videos "Vogue" and "Music". With Donna DeLory, Haris participated in various Madonna tours including Who's That Girl Tour (1987), Blond Ambition Tour (1990), The Girlie Show Tour (1993) and The Drowned World Tour (2001).

During The Re-Invention Tour in 2004, Haris was replaced with Siedah Garrett. The official word from Haris is that she "would like to focus on her solo career and family." Haris was also absent from Madonna's following Confessions Tour, Sticky & Sweet Tour and MDNA Tour.

Her vocal film work is also featured on the soundtracks of Corrina, Corrina, The Big Green, Noises Off, Coyote Ugly and Anastasia. She has also recorded television themes, including co-writing and performing two songs for the Fox series Dark Angel.

Haris toured with her father, until his death, while promoting their albums, Down Home Blues and In His Hands and Jazz Alley Cats.

Haris performs at benefits for AIDS, cancer research and Camp Harmony for inner city children. She is a supporter for the Music in the Classroom program and Rockers Against Drunk Driving and is an annual participant in the Season for Non Violence. Niki has made several television appearances in 2008 & presently in 2009 including: The Democratic National Convention 2008, CNN, Fox Network & Fuse TV.

Haris choreographed the MTV Awards for Madonna as well as providing some additional choreography on The Girlie Show, and for the television series Melrose Place. She helped stage scenes for Sharon Stone in Basic Instinct.

Haris has performed in lead appearances in Truth or Dare, was featured artist on the HBO special Sandra After Dark, and had a role in the film Heat.

This article uses material from the article Niki Haris from the free encyclopedia Wikipedia and it is licensed under the GNU Free Documentation License.

Everything I've Got Belongs To You Lilly Thornton
Update Required To play the media you will need to either update your browser to a recent version or update your Flash plugin.