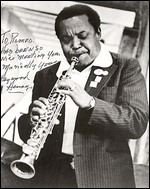 Born in Birmingham, Alabama, Henry began on clarinet before choosing baritone saxophone as his primary instrument. He continued to play clarinet throughout his career.

While he was a student at Alabama State Teachers College, he played with the Bama State Collegians in 1930 and became a member four years later. The Collegians became the Erskine Hawkins Orchestra when Hawkins led it. Henry was a member of the orchestra from 1934 through the 1950s.[1]

Following his time with Hawkins, Henry worked with Tiny Grimes, Julian Dash (1951), and the Fletcher Henderson Reunion Band (1957–58), and occasionally substituted for Harry Carney in the Duke Ellington Orchestra. He played on over 1,000 rock and roll records in the 1950s and 1960s, many of them anonymously and often with Mickey Baker. In the 1960s he played with Wilbur DeParis, Max Kaminsky, Snub Mosley, Louis Metcalf, Earl Hines (1969–71), Sy Oliver (1972–80), and the New York Jazz Repertory Company. He also worked in the orchestras of Broadway shows such as Ain't Misbehavin' in the 1970s. He participated in an Erskine Hawkins reunion ensemble in 1971 and performed into the 1980s.[1]

This article uses material from the article Haywood Henry from the free encyclopedia Wikipedia and it is licensed under the GNU Free Documentation License.

I Got A Mind To Tell You Spencer Day
Update Required To play the media you will need to either update your browser to a recent version or update your Flash plugin.