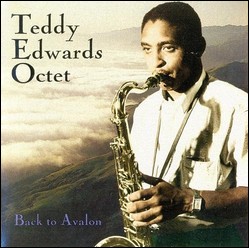 Edwards was born in Jackson, Mississippi. He learned to play at a very early age, first on alto saxophone and then clarinet.

His uncle sent for him to come to Detroit to live because he felt opportunities were better. Due to illness in the family, he went back to Jackson and ventured to Alexandria, Louisiana. He was persuaded by Ernie Fields to join his band after going to Tampa, Florida. Teddy had planned to go to New York City, but Ernie Fields convinced him he could get there by way of Washington, DC, if he worked with his band. Teddy ended up at the "Club Alabam" on Central Avenue in Los Angeles, which later became his city of residence.

Teddy Edwards played with many jazz notables, including his personal friend Charlie Parker, Roy Milton, Wynonie Harris, Vince Guaraldi, Joe Castro and Ernie Andrews. A classic 1947 recording with Dexter Gordon, The Duel, helped set him up as a legend, a status he liked to maintain by challenging other worthy sax players to similar duels whenever possible, including a recording with Houston Person. One such "memorable" duel took place in the 1980s at London's 100 Club with British tenor Dick Morrissey.[1]

In 1964, Edwards played with Benny Goodman at Disneyland, and at the 1964 New York World's Fair.

Edwards played live with has recorded on albums of Tom Waits. He toured with him on the Heart Attack and Vine tour and played to a packed Victoria Apollo in London with Waits and a bassist (the drummer had apparently been left behind after some dispute). The 1991 album Mississippi Lad features two tracks with Waits, and Waits covers the Edwards-written ballad "Little Man" on his Orphans collection.

With Max Roach and Clifford Brown

This article uses material from the article Teddy Edwards from the free encyclopedia Wikipedia and it is licensed under the GNU Free Documentation License.

Der Wasserfall Maximilian Geller
Update Required To play the media you will need to either update your browser to a recent version or update your Flash plugin.