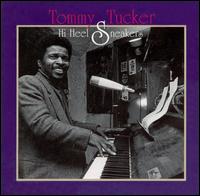 Tommy Tucker (March 5, 1933 – January 22, 1982)[1] was an American blues singer-songwriter and pianist. He was born Robert Higginbotham, to Leroy and Mary Higginbotham, the fifth of eleven chidren, in Springfield, Ohio. He is best known for the 1964 hit song, "Hi-Heel Sneakers", that went to #11 on the Billboard Hot 100 chart, and peaked at #23 in the UK Singles Chart.[2]

Tucker co-wrote a song with Atlantic Records founder executive Ahmet Ertegün, called "My Girl (I Really Love Her So)". Tucker left the music industry in the late 1960s, taking a position as a real estate agent in New Jersey. He also did freelance writing for a local newspaper in East Orange, New Jersey, writing of the plight and ignorance of black males in America, and the gullibility and exploitation of African Americans in general by the white-dominated media.[3] Tucker currently has four albums selling in Europe and over the internet, through the Red Lightnin' record label.

Tucker was the father of up-and-coming blues artist Teeny Tucker (real name Regina Westbrook), and was the cousin of Joan Higginbotham, the U.S. female astronaut who launched in November 2006 on the Space Shuttle Discovery.

He was also friends with Davey Moore, the featherweight who died following a boxing contest with Sugar Ramos; and Johnny Lytle, the renowned vibraphonist.

Tucker died in 1982 at the age of 48 at College Hospital in Newark, New Jersey, from inhaling carbon tetrachloride while refinishing the hardwood floors of his home; though his death has been alternatively attributed to food poisoning.[4]

This article uses material from the article Tommy Tucker from the free encyclopedia Wikipedia and it is licensed under the GNU Free Documentation License.

Brasil, terra do Samba Euphonia Jazz Group
Update Required To play the media you will need to either update your browser to a recent version or update your Flash plugin.