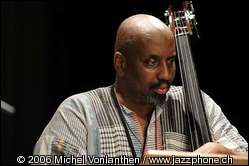 Parker was born Bronx, New York City. He was not formally trained as a classical player, though he did study with Jimmy Garrison, Richard Davis, and Wilbur Ware and learned the tradition. Parker is one of few jazz bassists who regularly plays arco. He also plays several other instruments from around the world, including the West African kora.

While Parker has been active since the early 1970s; he has had a higher public profile since the early 1990s. He is a prominent and influential musician in the New York City experimental jazz scene,[1] and has regularly appeared at music festivals around the world, including the Guelph Jazz Festival, in southern Ontario.

Parker first came to public attention with pianist Cecil Taylor. He has long been a member of saxophonist David S. Ware's quartet and in Peter Brötzmann' s groups.

He is a member of the cooperative Other Dimensions In Music. Together with his wife organizes the annual Vision Festival in New York City.

In 2006, Parker was awarded the Resounding Vision Award from Nameless Sound. In March 2007, William Parker's book, Who Owns Music?, was published by buddy's knife jazzedition in Cologne, Germany. Who Owns Music? assembles his political thoughts, poems, and musicological essays. In June 2011, Parker's second book, Conversations, a collection of interviews with notable free jazz musicians and forward thinkers, mainly from the African-American community, was published by Rogue Art.[7]

With Derek Bailey and John Zorn

This article uses material from the article William Parker (musician) from the free encyclopedia Wikipedia and it is licensed under the GNU Free Documentation License.

Yaht Doo Daht Ditt Wycliffe Gordon
Update Required To play the media you will need to either update your browser to a recent version or update your Flash plugin.