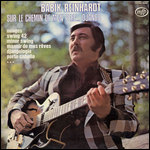 Babik Reinhardt (8 June 1944 – 13 November 2001) was a guitarist and the younger son of gypsy jazz guitarist Django Reinhardt by Django's second wife, Naguine. His elder half brother Lousson, who was Django's son by his first wife, Bella, was also a guitarist, but the two grew up in different families and rarely met.

Reinhardt was born in Paris. He learned guitar not from his father but from his mother; his father gave him piano lessons. When Reinhardt was nine years old, his father died.[1][2] His musical education in guitar was continued by uncles and cousins.

Drawn more to jazz fusion than gypsy jazz, Reinhardt recorded with fusion pioneer Larry Coryell and French violinist Didier Lockwood in the 1990s.[1][2] In 2001, he died of a heart attack at the age of 57 in Cannes, France.[1]

Reinhardt appeared on the album Generation Django (Dreyfus, 2009), a tribute to his father recorded by multiple musicians, including Django's grandson, David, and Biréli Lagrène.[3]

This article uses material from the article Babik Reinhardt from the free encyclopedia Wikipedia and it is licensed under the GNU Free Documentation License.

But Not For Me Marion Denzler
Update Required To play the media you will need to either update your browser to a recent version or update your Flash plugin.