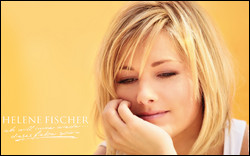 Helene Fischer (born August 5, 1984 in the Soviet Union) is a German singer and entertainer. Since her debut in 2005 she has had won several awards, including three "Echo" awards and three "Krone der Volksmusik" awards.

Helen Fischer was born in the Siberian town of Krasnoyarsk, Russia, where she spent her early childhood. In 1988 her ethnic German family emigrated to Germany.[1] In Germany, the family settled in the State of Rhineland-Palatinate.

After graduating from school, Helene Fischer attended the Frankfurt Stage & Musical School for three years, where she studied singing and acting.[2] During this time, Helene performed on stage at the State Theatre of Darmstadt, as well as on the stage of National Theatre in Frankfurt.

During her time at the Stage & Musical School, her mother secretly copied a demo CD with six songs of Helene and sent it to different recording studios to gauge the reaction of professionals.

Helene's debut on stage took place on May 14, 2005 in a program of the TV channel ARD. It was a duet with the singer Florian Silbereisen. The two later became a couple.[1]

Her popularity has increased greatly; she has won three prestigious Echo (German Grammy) awards, the coveted Goldene Henne twice, and the Krone der Volksmusik prize three times. All her albums and DVDs have achieved multiple gold and double platinum status. Her songs, with their stories of the everyday worries and woes of home-loving folks, are lyrically close to what the English speaking world calls Country although musically quite different.

Her circle of fans extends beyond Germany in large part to Austria, Switzerland, Belgium, the Netherlands and Scandinavia.

She released her first English album, "The English Ones", on June 7, 2010. The album was produced by Jean Frankfurter, one of the most renowned German producers, composers and arrangers of the previous 40 years. The album opens new horizons for Helene: I have always dreamed of singing my songs in another language. English is the language of Country, the music that we call Schlager. Language is a tool, but it is important that what you sing comes from the heart and that is what this album is about.

This article uses material from the article Helene Fischer from the free encyclopedia Wikipedia and it is licensed under the GNU Free Documentation License.

Valerie Martin Lechner
Update Required To play the media you will need to either update your browser to a recent version or update your Flash plugin.