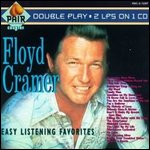 Floyd Cramer (October 27, 1933 – December 31, 1997) was an American Hall of Fame pianist who was one of the architects of the Nashville sound. He was known for his "slip note" piano style, in which an out-of-key note slides into the correct note.

Cramer was born in Shreveport, Louisiana, and grew up in the small town of Huttig, Arkansas. He taught himself to play the piano. After finishing high school, he returned to Shreveport, where he worked as a pianist for the radio show Louisiana Hayride.

In 1953, he cut his first single, "Dancin' Diane", backed with "Little Brown Jug", for the local Abbott label. In 1955 he played dates with an emerging talent who would later figure significantly in his career, Elvis Presley.[1][2]

In 1955 Cramer moved to Nashville, where piano accompaniment in country music was growing in popularity. By the next year he was, in his words, "in day and night doing session".[3] Before long, he was one of the busiest studio musicians in the industry, playing piano for stars such as Elvis Presley, Brenda Lee, Patsy Cline, the Browns, Jim Reeves, Eddy Arnold, Roy Orbison, Don Gibson, and the Everly Brothers, among others.[4] It was Cramer's piano playing, for instance, on Presley's first RCA Victor single, "Heartbreak Hotel". However, Cramer remained strictly a session player, a virtual unknown to anyone outside the music industry.

Cramer had released records under his own name since the early 1950s and became well known following the release of "Last Date", a 45-rpm single, released by RCA Victor in 1960.[5] The instrumental piece exhibited a relatively new concept in piano playing known as the "slip note" style. The record went to number two on the Billboard Hot 100 pop music chart, sold over one million copies, and was awarded a gold disc. The song was kept out of the number 1 position by Elvis Presley's "Are You Lonesome Tonight".[6] The session pianist for Elvis's recording of that #1 song, in a very early morning session (about 4:00 AM) at RCA Studio B in Nashville, was none other than Floyd Cramer himself.

Of the characteristic "slip note" style, Cramer commented, "The style I use mainly is a whole-tone slur which gives more of a lonesome cowboy sound. You hit a note and slide almost simultaneously to another." The origin of the style is uncertain. It seems to have first emerged at the 1960 session for Hank Locklin's hit "Please Help Me, I'm Falling", when Cramer was asked by Chet Atkins to copy the unusual piano styling of songwriter Don Robertson, who had played on the demo. Cramer also acknowledged the influence of "Mother" Maybelle Carter's autoharp playing.[1]

By the mid-1960s, Cramer had become a respected performer, making numerous albums and touring with guitar maestro Chet Atkins and saxophonist Boots Randolph, sometimes headlining and sometimes as the opening act for Eddy Arnold. Cramer also performed with them as a member of the Million Dollar Band.

Over the years, he continued to balance session work with his own albums. Many of these featured standards or popular hits of the era. From 1965 to 1974 he annually recorded a disc of the year's biggest hits, entitled Class of . . . . Other albums included I Remember Hank Williams (1962), Floyd Cramer Plays the Monkees (1967), Sounds of Sunday (1971) and Looking for Mr. Goodbar (1978). In 1977 Floyd Cramer and the Keyboard Kick Band was released, on which he played eight different keyboard instruments.[1]

In 1980 Cramer's final major chart entry was a version of the theme of the television series Dallas.[1][8]

Cramer died of lung cancer on New Year’s Eve, 1997 at the age of 64. He was interred in the Spring Hill Cemetery in the Nashville suburb of Madison, Tennessee.

His grandson, Jason Coleman, inherited his grandfather's skill on the piano, performing with him on television and in concert at a young age. At age 17, he played "Please Help Me, I'm Falling", the first song to feature Cramer's signature slip notes, with Hank Locklin at the Grand Ole Opry, and two years later played piano for the Medallion Ceremony at Cramer's induction into the Country Music Hall of Fame. He carries on his grandfather's legacy with recordings and a touring tribute concert, The Piano Magic of Floyd Cramer, sharing the piano arrangements and story of Cramer's contributions to American music.

Trying to launch myself on a solo career, after being Elvis Presley's pianist for so long, placed me in an unenviable position. Some people thought I was trying to cash in. If I had wanted to cash in on my association with Elvis, I would have done it five years ago.

This article uses material from the article Floyd Cramer from the free encyclopedia Wikipedia and it is licensed under the GNU Free Documentation License.

Dance of a vulture family Jick the Rapper
Update Required To play the media you will need to either update your browser to a recent version or update your Flash plugin.