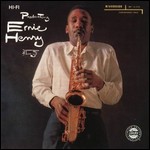 Henry played in the late 1940s with Tadd Dameron (1947), Fats Navarro, Charlie Ventura, Max Roach, and Dizzy Gillespie (1948–49). From 1950 to 1952 he played in the band of Illinois Jacquet. After a few years in the shadows, he returned to play with Thelonious Monk (1956), Charles Mingus, Kenny Dorham, Kenny Drew, Wynton Kelly, Wilbur Ware, Art Taylor, Philly Joe Jones and Gillespie again (1956–57). He recorded three albums as a leader for the Riverside label shortly before his death at the end of 1957. He died of a heroin overdose, aged 31.

This article uses material from the article Ernie Henry from the free encyclopedia Wikipedia and it is licensed under the GNU Free Documentation License.

How About You Bodil Niska
Update Required To play the media you will need to either update your browser to a recent version or update your Flash plugin.