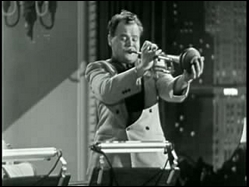 He studied cornet with Frank Simon, but later began studying medicine. Later he discontinued his studies after finding success as a trumpeter. Early in his career he played in the band of Austin Wylie. He gained attention working with Bob Crosby (1937–1940), and later performed with Artie Shaw, Les Brown, and Benny Goodman.

On October 7, 1940 during his brief stay with Artie Shaw's orchestra, he performed what has been described as a "legendary trumpet solo" on the hit song "Stardust." Between 1943 and 1947, taking a break to serve in the United States armed forces, Butterfield led his own orchestra. On September 20, 1944, Capitol recorded the jazz standard "Moonlight In Vermont", which featured a vocal by Margaret Whiting and a trumpet solo by Butterfield. The liner notes from the CD Capitol from the Vaults, Volume 2, "Vine Street Divas" indicate that, although Billy Butterfield & His Orchestra were credited with the song, it was really the Les Brown band recording under the name of Billy Butterfield because Brown was under contract to another label at the time.

He recorded two albums with Ray Conniff in the 1950s (Conniff meets Butterfield) and 1960s (Just Kiddin' Around). Later in the 1960s he recorded two albums with his own orchestra for Columbia Records. The trumpeter was a member of the World's Greatest Jazz Band led by Yank Lawson and Bob Haggart from the late 1960s until his death in 1988. He also freelanced as a guest star with many bands all over the world, and performed at many jazz festivals, including the Manassas Jazz Festival and Dick Gibson's Bash in Colorado.

This article uses material from the article Billy Butterfield from the free encyclopedia Wikipedia and it is licensed under the GNU Free Documentation License.

One Minute John Primer
Update Required To play the media you will need to either update your browser to a recent version or update your Flash plugin.