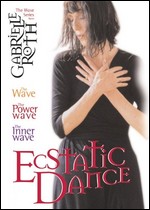 Gabrielle Roth (February 4, 1941 – October 22, 2012[1]) was an American dancer and musician in the world music and trance dance genres, with a special interest in shamanism. She created the 5Rhythms approach to movement in the late 1970s; there are now hundreds of 5Rhythms teachers worldwide who use her approach in their work.

Roth worked at the Kripalu Center for Yoga & Health and at the Omega Institute for Holistic Studies. She also founded an experimental theatre company in New York, and wrote three books, created over twenty albums of trance dance music with her band The Mirrors, and directed or has been the subject of ten videos.

Born in San Francisco,[2] Roth was originally inspired to dance, aged seven, by seeing a ballerina through the window of a dance school, deciding that was her vocation. She found a book that showed the ballet positions and started to practice in her bedroom, eventually coming to have ballet lessons. She attended Roman Catholic schools and listened to the music of the local fundamentalist church.[3]

Roth described being inspired by the dance of Spanish gypsy La Chunga and by seeing the Nigerian National Ballet. She trained in traditional dance methods, suffering from anorexia during her teenage years. Roth paid for college education by teaching movement in rehabilitation centres. Following college she lived and worked in Europe for three years, during the mid 1960s. During this time she visited the concentration camps memorials in Germany that she had studied during college.[2]

She injured her knee in a skiing accident in Germany and later again in an African dance class. At 26, she was told that she needed surgery and wouldn't dance again and resigned herself to the prognosis.[2] She entered a depression and later retreated to Big Sur in California, joining a group at the Esalen Institute. She became a masseuse there. She found that her body healed itself through dance, despite what the doctors had said. Gestalt psychiatrist Fritz Perls asked her to teach dance at the Esalen Institute and she set out to find a structure for dance as a transformative process. Out of her work at Esalen she designed the 'Wave' of the 5Rhythms approach, Flowing, Staccato, Chaos, Lyrical, Stillness.[2][3][4]

Roth's book, Sweat Your Prayers, begins with an autobiographical prologue, "God, Sex, & My Body", in which she writes of the contradictions in her personality that led her to dance. She comments, "I loved to work out my body but I hated the mirrors".[5] She notes that she was taught by Catholic nuns "with eyes trained to scan for sin"[6] and that her first dance teacher was "an old woman with frizzy dyed red hair, a funny accent, and a long thin stick" who would beat her whenever she made a mistake, initiating in Roth a severe inferiority complex.[6] In college, she became pregnant. She found her lover insensitive to the news and had an abortion three days later.[7]

Roth writes that she felt the importance of privacy to her kind of dance while teaching at Esalen in a room "lined with picture windows". Passers by would stare in during sessions. Roth comments, "this was tragic, as the majority of my students were paralytically self-conscious when it came to moving their bodies."[8] She noticed that her students had difficulty breathing.[8] Her book Sweat Your Prayers ends with her vision of spreading dance across the world, the power of movement "leading us back into the garden [of Eden], back to the earth, whole and healed, spirit and flesh reunited".[9]

Roth was a faculty member at The Kripalu Center for Yoga & Health (Stockbridge, Massachusetts) and has taught at the Omega Institute for Holistic Studies (Rhinebeck, New York). She trained for three years with Oscar Ichazo, founder of the Arica School and set up her own experimental theatre company in New York.[2]

The Moving Center teaches her work through her school in New York; it has certified over 400 5Rhythms teachers worldwide. She teaches experimental theatre in New York based on her 5Rhythms. Roth was music director of the theatre company The Mirrors and has been a member of the Actors Studio. Roth directed theatre productions of Savage Love, by Sam Shepard and Joseph Chaikin, at The Culture Project (Mercer Street, New York City).[10]

Roth wrote three books: Sweat Your Prayers: Movement as Spiritual Practice, Maps to Ecstasy: Teachings of an Urban Shaman, and Connections: The 5 Threads of Intuitive Wisdom. She founded The Moving Center School in 1977 in New York.[11]

Roth performed and recorded as Gabrielle Roth and the Mirrors and produced over 20 albums.

YogaChicago describes Jhoom as "pure energy and bliss. Intense rhythms".[12] Hot Indie News describes Still Chillin' as "without question yoga music" that "lends to an ambient, trance-like, meditative state".[13] Awareness Magazine writes that the music pulses "creating a rhythmic aura that transports the listener", in a way that is perfect for yoga.[14] Michael Riversong writes of "Silver Desert Cafe" on Tongues that "I always dance when it comes up".[15]

Roth and the Mirrors provided music for Michelle Mahrer's film, Dances of Ecstasy, in which Roth has an acting credit, appearing as herself. The New York Times review noted that "Whirling Dervishes from Turkey, Orisha Priestesses from Nigeria and Brazil, shaman healers from the Kalahari and dancers in a Gabrielle Roth workshop in New York, pulse to the same beat".[16]

The 5Rhythms movement system, founded by Roth in the late 1970s, focuses on five body rhythms: flowing, staccato, chaos, lyrical and stillness and is "a way to become conscious through dance".[17] The movement has spread worldwide with 245 registered teachers.[18][19]

The 5Rhythms have been the subject of at least one Ph.D thesis,[20] and some academic publications.[21][22] The Huffington Post described Roth as "an incredibly influential teacher of meditative dance".[1]

Charlotte Macleod, writing in the London Evening Standard, describes dancing Roth's 5Rhythms as a kind of antidote to life in a large city, and how she was attracted to a dance class by a video of Thom Yorke. The class leaves her "mentally and physically refreshed, and oddly connected to the other dancers." The dance was "a kind of moving meditation" for her.[23]

Christine Ottery, writing in The Guardian, states that "ecstatic dancing has an image problem" and "encompasses everything from large global movements such as 5 Rhythms and Biodanza to local drum'n'dance meet-ups". She suggests that readers may "find 5 Rhythms a good place to start", and does so herself: "Nervously, I stretch and warm my muscles. As the rhythms take off, I shake off my shyness." She dances in different ways, alone or with partners. "My body is expressing itself - it's utter abandonment and a complete high."[24]

In 2007, Roth founded the non-profit 5Rhythms Reach Out which offered classes in 5Rhythms to various groups, including those suffering from Alzheimer's disease, other dementias, and cancer.[25]

Roth's son is Jonathan Horan, honored by Gabrielle to lead the 5Rhythms forward into future generations around the world[26]

This article uses material from the article Gabrielle Roth from the free encyclopedia Wikipedia and it is licensed under the GNU Free Documentation License.

Out Of The Night Elmar Brass Trio
Update Required To play the media you will need to either update your browser to a recent version or update your Flash plugin.