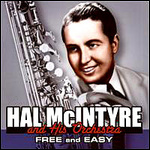 McIntyre played extensively as a teenager and led his own octet in 1935. Shortly thereafter, he was offered a temporary slot as an alto saxophonist behind Benny Goodman; this lasted only ten days, but Glenn Miller heard of his ability and drafted him as a founding member of the Glenn Miller Orchestra, where he played from 1937 to 1941.

Miller encouraged McIntyre to start his own group again, and the McIntyre Orchestra first played in New Rochelle, New York in 1941; the ensemble included vocalists Gloria Van, Ruth Gaylor, and Al Nobel, bassist Eddie Safranski, and saxophonist Allen Eager. They played many major ballrooms throughout the United States, and played overseas for troops during World War II. He toured extensively with songstress Sunny Gale until the summer of '51. He maintained the orchestra into the 1950s, backing The Mills Brothers for their 1952 smash hit "Glow Worm".

He co-wrote the song "Daisy Mae" with Billy May which was recorded by Glenn Miller and His Orchestra.

McIntyre died in a house fire in 1959. His, son, Hal Jr. (dec'd), was a talented saxophone and clarinet player who attended Berklee College of Music in the 1960s. In the 1970s, Hal Jr ran a big band in the Boston area, playing many of the original McIntyre Orchestra arrangements.

This article uses material from the article Hal McIntyre from the free encyclopedia Wikipedia and it is licensed under the GNU Free Documentation License.

Autumn Nocturne Scott Hamilton
Update Required To play the media you will need to either update your browser to a recent version or update your Flash plugin.