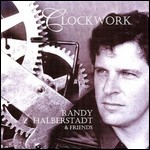 Randy wrote Metaphors for the Musician (2001), a collection of jazz theory and secrets gleaned from 25 years as a teacher and performer.[1]

Randy is a Professor of Jazz Theory at Cornish College of the Arts.[2] He teaches theory, eartraining, jazz piano, and vocal jazz.

This article uses material from the article Randy Halberstadt from the free encyclopedia Wikipedia and it is licensed under the GNU Free Documentation License.