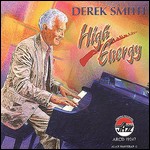 Smith played piano from a very young age, and worked professionally from age 14. In the 1950s he played with many noted British jazz musicians, such as Kenny Graham, John Dankworth, and Kenny Baker, then moved to New York City in the middle of the decade. He continued playing jazz in America with Benny Goodman and Connie Kay, among others, and also worked copiously as a session musician for recordings. In the 1960s he played piano in the The Tonight Show Band, the orchestra led by Doc Severinsen for The Tonight Show Starring Johnny Carson. He continued to work with Goodman in the 1970s, and recorded often as a leader from 1978. He worked as a solo performer into the 2000s and also played in a trio with Bobby Rosengarden and Milt Hinton.[1]

This article uses material from the article Derek Smith (musician) from the free encyclopedia Wikipedia and it is licensed under the GNU Free Documentation License.