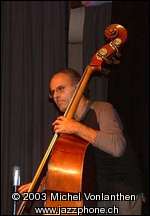 Michel Benita (born 1954 in Algiers, Algeria) is a double bass player, prominent in jazz music since 1980's.[1] He moved to Paris in 1981 and became one of the major discoveries in European jazz scene. He has worked with Aldo Romano, Marc Ducret, Martial Solal, Lee Konitz, Andy Sheppard, Dino Saluzzi, and Archie Shepp. He formed the ELB trio in 1999 with Vietnamese guitar player Nguyên Lê and American drummer Peter Erskine.

This article uses material from the article Michel Benita from the free encyclopedia Wikipedia and it is licensed under the GNU Free Documentation License.