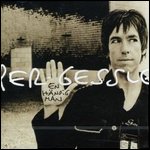 Alias Son Of A Plumber

Per Håkan Gessle (Swedish pronunciation: [pɛːr ²ɡɛslɛ]; born 12 January 1959) is a Swedish pop singer-songwriter, guitarist, and harmonicist. He is the lead singer of the Swedish pop group Gyllene Tider and formed Roxette with Marie Fredriksson (Gessle being the chief songwriter in both bands). With Fredriksson's illness in 2002, he went back to recording solo albums, reformed Gyllene Tider in 2004 and became a successful artist in his native Sweden, selling multi-platinum albums.

Per Gessle was a founding member of Gyllene Tider, in 1976. They quickly became a popular group in Sweden, but after their fourth album, The Heartland Café (1984), sold poorly compared to their previous albums, the group disbanded. Gessle wrote. "We decided to put Gyllene Tider to rest... until further notice."[1]

In 1982, Gessle released his first solo album, Per Gessle and after Gyllene Tider split-up his second album, Scener, quickly appeared in 1985.

Gessle and Marie Fredriksson had been friends for a few years before they came together as Roxette in 1986. After the success of their first hit "Neverending Love", which was written by Gessle, they quickly recorded Pearls of Passion using material which was originally intended for Per's third solo album.[2]

Roxette went on to achieve four U.S. #1's and two #2's, with their albums Look Sharp! and Joyride attaining platinum status in a number of countries. After Roxette's early nineties success, Per released a demo compilation album in 1992, På väg, 1982–86. After the release of Crash! Boom! Bang! and subsequent world tour, Roxette took a break.

The World According to Gessle

In 1996, after a reunion and subsequent tour of Gyllene Tider, Gessle recorded his first English solo album, using Brainpool and Gyllene Tider as backing musicians. Christoffer Lundquist from Brainpool would also come to collaborate with Per on later releases.

In 1997 Hjärtats trakt – en samling was released as a best-of album.

After Roxette released Have a Nice Day (1999) and Room Service (2001) to moderate success, Per continued with his solo work.

Also in 2004, saw Gessle and Gyllene Tider reunited for a 25th-anniversary celebration that included the band's first album in 20 years, Finn 5 fel!, and another very successful tour in Sweden. They beat the Ullevi stadium attendance record, which was later broken by fellow Swede Håkan Hellström in 2016 (70,144),[7] and the band played to almost half a million fans. As a result, the group was honoured with four awards in Sweden.

Son of a Plumber

With Son of a Plumber, he continued his association with other Swedish artists. Jens Jansson along with previous collaborators Josefsson and Lundquist, helped Gessle create his second English album. Released in November 2005, the album contains all of Gessle's musical heritage. His father was a plumber and the 2-disc album contains a song dedicated to him, "Kurt – The Fastest Plumber in the West". In Sweden, the album sold platinum on the first day of release.[3] The album was also released in several other European countries in April 2006.

In June 2007, he released another solo album in Swedish with the name En händig man, which shipped three times platinum.[3] A single of the same name was released; "En händig man". Later on October a book of "Att vara Per Gessle" was published, telling some of the unknown facts about Gessle and his 30-year career.

In late 2008, Gessle released Party Crasher, his seventh solo album and third in English. The first single off the album "Silly Really" was released on 29 October 2008 and achieved critical acclaim from Expressen, calling Per a "pop genius".[8] After that, Gessle started his Party Crasher Tour, where Marie Fredriksson joined him on stage twice, in Amsterdam and Stockholm. This was eight years after their last live performance together during Roxette's Room Service Tour in 2001, and after Fredriksson had recovered from a brain tumor discovered in 2002.

The return of Roxette

Following Fredriksson's guest appearance in Amsterdam, Roxette started to perform live again. Initially this was during the Night of the Proms concert series in Belgium, the Netherlands and Germany in 2009, later followed by extensive concert tours in 2010, 2011 and 2012, performing over 100 shows on all 6 continents. In the summer of 2013, Gessle reunited with his first band Gyllene Tider once more, performing some 20 shows in Sweden for an audience totalling about 300,000 people.

In 1990 Per Gessle wrote a single, "The Sweet Hello, The Sad Goodbye", for Thomas Anders (of Modern Talking fame); Roxette would release their version as the B-side of their single "Spending My Time". He has also participated with the Swedish singer Nisse Hellberg in the project The Lonely Boys.

In 1996 he worked with Belinda Carlisle and wrote two songs for her album, A Woman and a Man; "Always Breaking My Heart" and "Love Doesn't Live Here". The former was released as a single, becoming a UK top 10 hit. Gessle also recorded a demo song for Carlisle, called "Liberty", which also was intended for the same album, but Carlisle turned down, asking for something more guitar-oriented.[9] So Gessle came up with "Always Breaking My Heart".[9]

Gessle is one of three people (also including Björn Ulvaeus) who own NoteHeads, a Swedish company which publishes the music notation program Igor Engraver.[11] Along with Björn Nordstrand he also owns a hotel in Tylösand.[12]

He married his long-time girlfriend Åsa Nordin (born 1961) in 1993 at Västra Strö Church, Eslöv, Sweden. The wedding reception was held in nearby Trollenäs Castle. They have a son, Gabriel Titus, born on 5 August 1997.

This article uses material from the article Per Gessle from the free encyclopedia Wikipedia and it is licensed under the GNU Free Documentation License.

Flutura iku Kapsamun
Update Required To play the media you will need to either update your browser to a recent version or update your Flash plugin.