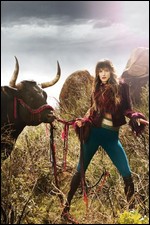 Lewis was born in Los Angeles, California to Geoffrey Lewis, an actor, and Glenis Duggan Batley, a graphic designer. She has four siblings – brothers Lightfield and Peter, and sisters Dierdre and Brandy.

Juliette Lewis wanted to act since she was six years old, and has appeared in over forty films and made-for-TV movies. She appeared in The Wonder Years as Wayne's girlfriend in Episodes 24, 34 and 36. Lewis first garnered international attention and acclaim in 1991 with her turn as Danielle Bowden in Martin Scorsese's remake of Cape Fear, for which she was nominated for an Academy Award for Best Supporting Actress in 1992. Over the next few years, she won further critical support in Peter Medak's Romeo Is Bleeding, and as opposite Brad Pitt in Kalifornia. In 1993 she acted alongside Leonardo Dicaprio and Johnny Depp in the drama film What's Eating Gilbert Grape. She played Mallory Knox in Oliver Stone's Natural Born Killers.[2] She played a rock singer in the film Strange Days, doing her own singing on covers of two songs written by PJ Harvey, giving fans an early look at her musical prowess.

She received an Emmy nomination for her performance in Hysterical Blindness in 2003. She also appeared in the HIM music video for "Buried Alive By Love" in 2003.

Lewis appeared in Rockstar Games' Grand Theft Auto IV, providing the voice of "Juliette", the host of fictional radio station "Radio Broker". She starred in the video for the Melissa Etheridge song "Come To My Window", and has also appeared in a GAP commercial which she was dancing with Daft Punk to the tune of the song "Digital Love".

Lewis launched a career as a solo singer and musician, leading a group called Juliette and the Licks until 2009. After splitting with the Licks, she has formed a new band called The New Romantiques, with whom she has recorded a new album entitled Terra Incognita.[3][4]

Lewis dated actor Brad Pitt and co-starred with him in the films Kalifornia and Too Young to Die?.[7][8] She also dated Michael Dewitt, the nanny employed by musicians Kurt Cobain and Courtney Love. She married professional skateboarder Steve Berra in 1999; they divorced in 2005.

This article uses material from the article Juliette Lewis from the free encyclopedia Wikipedia and it is licensed under the GNU Free Documentation License.

Milestones Hazy Osterwald
Update Required To play the media you will need to either update your browser to a recent version or update your Flash plugin.