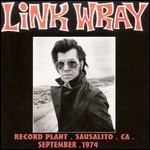 Frederick Lincoln "Link" Wray Jr (May 2, 1929 November 5, 2005) was an American rock and roll guitarist, songwriter and vocalist who first came to popularity in the late 1950s.

Building on the overdriven, distorted electric guitar sound of early electric blues records, his 1958 instrumental hit "Rumble" by Link Wray and his Ray Men invented "the power chord, the major modus operandi of modern rock guitarists,"[2] making possible "punk and heavy rock."[3] Rolling Stone placed Wray at number 45 of the 100 greatest guitarists of all time.[4] In 2013 he was announced as a nominee for the Rock and Roll Hall of Fame.[5]

Wray was born in Dunn, North Carolina, to Fred Lincoln Wray,Sr. and his wife Lillian M. Coats.[6][7] With half Shawnee Indian ancestry, Wray frequently spoke of this in performances and interviews. Three songs he performed were named for American Indian tribes: "Shawnee", "Apache", and "Comanche." "Apache" was an instrumental composed by Jerry Lordan; it was a hit in the United Kingdom for The Shadows in 1960. Wray recorded a cover version 30 years later, when it was also associated with The Ventures and the Incredible Bongo Band.

Wray served in the US Army during the Korean War, and contracted tuberculosis, which laid him up in a hospital for a year. His stay concluded with the removal of a lung, which doctors predicted would mean he would never be able to sing again.[8]

After his initial hits, Wray's career had periods of retirement followed by renewed popularity, particularly in Europe. To escape the "trap" of big business involvement in music, he began recording albums using a three-track studio he converted from a chicken shack.[8]

While living in the San Francisco Bay Area in the early 1970s, Wray was introduced to Quicksilver Messenger Service guitarist John Cipollina by bassist James Hutchinson.[9] He subsequently formed a band initially featuring special guest Cipollina along with the rhythm section from Cipollina's band Copperhead, bassist Hutch Hutchinson, and drummer David Weber. They opened for the band Lighthouse at The Whisky a Go Go in Los Angeles from May 1519, 1974.[10] He later did numerous concerts and radio broadcasts in the Bay Area including KSAN (FM) and the Bill Graham venue, Winterland Ballroom with Les Lizama later replacing Hutchinson on bass.[11] He toured and recorded two albums with retro-rockabilly artist Robert Gordon in the late 1970s.[12] The 1980s to the present day saw a large number of reissues as well as new material. One member of his band in the 1980s, drummer Anton Fig, later became drummer in the CBS Orchestra on the Late Show with David Letterman. In 1994, he played on four songs of the album Chatterton by French rocker Alain Bashung.[13]

Wray's first three marriages - to Elizabeth Canady Wray, Ethel (Kitty) Tidwell Wray and Sharon Wray - each ended in divorce. He had three children with Kitty. Link Elvis, Belinda, and Mona Kay. Link Elvis in his youth was a small town singer/ guitar player in MD. Belinda is a successful artist ranging from pencil to paintings in NC . Mona Kay is mainly known in the small town of Sumter SC for her singing, along with her son for his dancing, (Jonathan Tidwell) in bar and grills. He had eight children with them, but had little contact with any after settling in Denmark.[14]

Wray moved to Denmark in the 1980s after marrying his wife Olive, a Danish student who had been studying Native American culture. He spent his last years on a Danish island, touring frequently. He died of heart failure, at the age of 76, in 2005 at his home in Copenhagen. He was buried in the crypt of the Christian's Church, Copenhagen.[15]

Jack Rose cited Wray as an influence,[16] as did Iggy Pop.[17] Jimmy Page says that Link Wray had a "real rebel attitude" and credits him in It Might Get Loud as a major influence in his early career. According to Rolling Stone, Peter Townshend of The Who once said, "If it hadn't been for Link Wray and 'Rumble,' I never would have picked up a guitar."

This article uses material from the article Link Wray from the free encyclopedia Wikipedia and it is licensed under the GNU Free Documentation License.